by Spotlight News
in Food and Drink, The Spot
Reading Time: 4 mins read 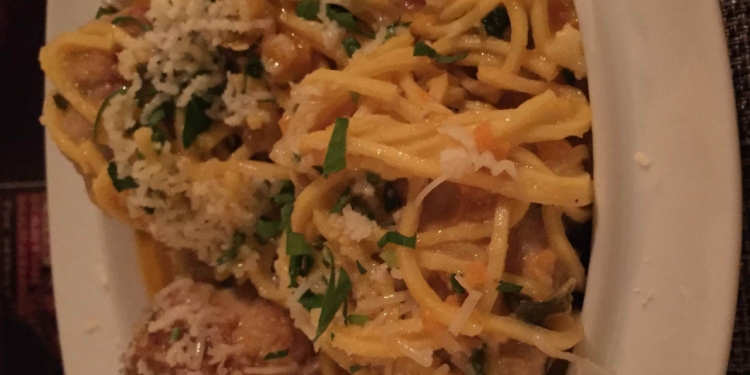 SCOTIA — Sometimes you just need comfort food, but in an atmosphere that makes you feel special. We had been meaning to try Angelo’s Tavolo for a while, (we have visited a number of the other Mazzone family’s establishments), but never quite made it Tavolo. It is located within Glen Sanders Mansion, so if you don’t know it is there, it isn’t necessarily a place that you just drive by and decide to go to. We made reservations (as usual) and bundled up, as the temps last weekend had dropped quite a bit and headed out.

I had taken a look at its menu online (I almost always do this) and had a few choices in mind before we even arrived. We were seated immediately, and our water glasses were filled before we even had a chance to open our menus. The hostess who seated us explained that it had a breast cancer awareness fundraiser going on. The drink (pink) was a fruit flavored martini and if you purchase one at each of their locations during the month, you receive a gift card. It sounded like a great deal for an important cause.

Our server arrived quickly, and the promotional drink sounded delicious, so I decided to give it a try. The boyfriend chose one of its specialty bourbon drinks, after the advice of the server. I also placed an order for its lobster bisque, which I knew we would in all likelihood share.

The atmosphere was so relaxing, that it didn’t matter to either of us how long anything took to arrive. Our drinks did come fairly quickly however, but mine came first and our server explained there had been a mix up with the boyfriends, apologized profusely, and promised he would return with it momentarily. He went out of the way to apologize and make sure we were taken care of, when in reality, neither of us would have even noticed. My drink was delicious; it tasted like a refreshing summer juice drink!

In the meantime, we decided on our meals, and both of us were caught between two different choices. Our server immediately told us which ones to choose, and I always prefer to take the advice of the server (especially if they are as knowledgeable as this one seemed to be).

We were served bread after we finished the soup and while we waited for our meals, to arrive. At this point, I noticed that the boyfriend had finished his drink, which is unlike him, but can only mean that he really enjoyed it. Our server came back to check in on us, and brought him another drink, “on the house” for the original (very minor) inconvenience. It was such a nice touch, we were both actually a bit shocked.

As our dinners arrived, I was glad I had not finished the entire soup. As mentioned, I went with the servers recommendation and chose the spaghetti and meatballs. This was not your typical spaghetti and meatballs, it was perfectly cooked spaghetti in a light vodka cream sauce. It was served with four of their famous chicken meatballs. The server had raved about the meatballs, and I could instantly tell why. The first bite was just perfect, they were moist, full of traditional meatball flavors but the chicken added a special quality that can’t compare to anything I have had prior. The pasta and sauce was also wonderful, cooked just passed al dente with enough sauce to add flavor but not drown the meatballs. It was by far one of the best pasta dishes I have ever had.

My boyfriend had chosen the swordfish, which was served with a kale type vegetable. He is often skeptical about ordering fish out, he really despises dry fish, but decided to order it at the servers advice. He was really happy with his decision. He generally eats more quickly than me anyway, but he liked his so much that I had barely even touched mine and he was done!

I took my time eating, and my date enjoyed the remainder of his drink. Our server stopped by occasionally to check on us, and chat a little when he felt he could without intruding. Once I was done, we decided on coffee (for him) and tea (for me) and they brought over (again complimentary) biscotti. The biscotti, too, was delicious. We even ended up taking that home along with my leftovers.

Our night out, which was originally just meant to relax us, turned out to be one the nicest nights we have had in awhile. I highly recommend you make a date to head over to Tavolo, and if you do, please ask for Eric. I rarely mention servers by name, but Eric went above and beyond and it was important (to both of us) that we give him special notice.

Elizabeth Schaefer is a regular contributor to TheSpot518. You can find her restaurant reviews here each week.