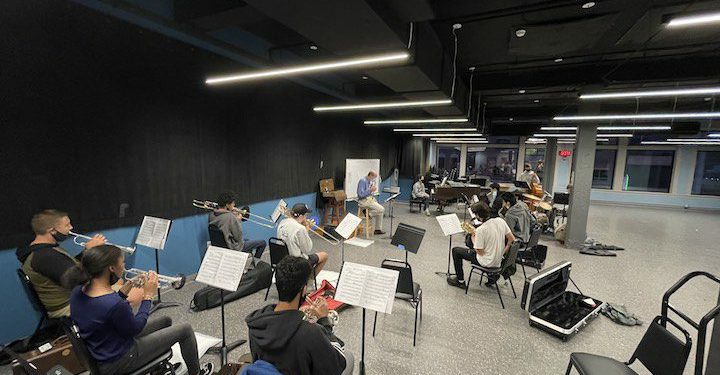 SCHENECTADY — Listening to Etienne Abelin describe the principles of Soundpainting draws one to compare it to Zen Buddhism.

This season will mark his first full term as the Empire State Youth Orchestra’s music director, though he’s had his hands on the company’s reins since March. His young tenure is defined by his MusicNOW curriculum, a concept that transforms musicians into movers, connectors, storytellers, improvisers and creators. It’s a means of relaxing young musicians, directing them away from the rigidity of reading music and tapping into the movement of creating it.

Soundpainting, created by Woodstock-based composer Walter Thompson, is an innovative composing sign language that connects music with movement using more than 1500 gestures. The musical composition is created within the moment, as each musician reads the signs — whether they be provided by the conductor, fellow players, dancers or audience members.

“It is a focus on the here and now, and whatever we feel right now is to be embraced,” Abelin said. “Whatever happens musically at the moment is to be embraced and is to be played on, and to be developed.”

As the orchestra performs, each player is in a form of conversation; reading and responding in kind to the composer. As conversations go, a gesture can be misinterpreted and errors are made. Depending on the composer, what was initially a mistake can lead to a new opportunity.

“It’s in the moment. It’s like it’s only gonna happen then. This is the composition and the next time it gets played, it’s gonna sound different. Now, how different? That’s another question,” Abelin said.

The 2022-2023 season begins on Sunday, Oct. 30, at the Troy Savings Bank Music Hall, with ESYO’s flagship Symphony Orchestra performing Beethoven’s 7th Symphony; a work Beethoven described as the “glory of light through darkness.” The concert also features Gabriella Smith’s Field Guide, a musical safari into the natural world, as well as surprising percussion interventions in the Beethoven Symphony and a student-led instant composition.

Throughout the year, ESYO will host Soundpainting ensembles and collaborative workshops featuring guest artists and experts in storytelling, creative movement, breathing, and improvisation. Audiences can experience Soundpainting and, as another MusicNOW inspired novelty, joyful encore performances that include choreography and often unite several ESYO ensembles at various ESYO concerts, including Opening Day with ESYO Symphony Orchestra.

The season also features a collaboration with RPI’s Rensselaer orchestra featuring Music:Eyes, a new digital music visualization tool, the return of CBS’s Melodies of Christmas after a two-year pause, performances by ESYO’s new student-led Chamber Orchestra, ESYO’s Annual Young People’s Concert in March, and the Lois Lyman Concerto Competition. The season concludes next June with a performance at Carnegie Hall.