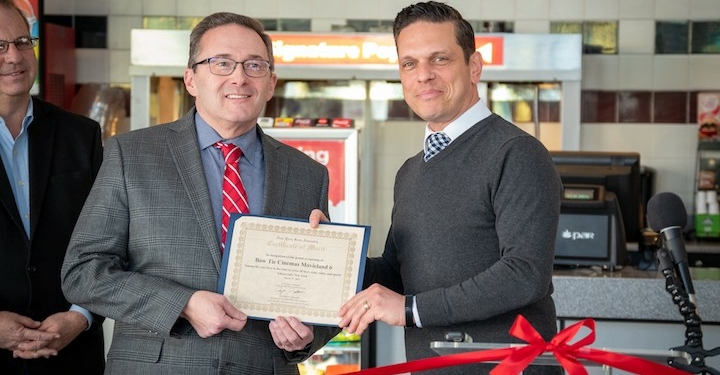 SCHENECTADY – Bow Tie Cinemas announced that Movieland 6 in Schenectady is the first movie theater in New York State to serve beer, wine, and cider under the State Liquor Authority’s new guidelines as declared earlier this year.

The new guidance, the result of a declaratory ruling made by the SLA, allows for movie theaters to serve beer, wine, and cider to theatergoers without having to have a table at every seat. Previously, theaters were restricted to consumption inside a café area adjoining the lobby or if the theater had a full restaurant kitchen, theater staff were only permitted to bring beverages to a patron at their seat with a fixed table.

“This has been years in the making and we couldn’t be more proud that Movieland is the first theater in New York State to be covered by this new guidance by the SLA,” said Joe Masher, chief operating officer of Bow Tie Cinemas. “Thanks to Governor Hochul and our longtime legislative champions, Senator Diane Savino and Assemblymember Patricia Fahy, for making this possible this year. Bow Tie Cinemas has an excellent track record of responsible serving of alcoholic beverages, in addition to working with local craft beverage producers such as Druthers Brewing and Nine Pin Cider.”

Through this new regulation, movie theaters – which have been longtime anchors for many Upstate downtowns or commercial corridors – will be able to directly support local craft beverage producers within their communities.

In commemoration of the change, Bow Tie Cinemas invited local and state officials to help celebrate.

“After some very challenging times, today begins a new chapter for local theaters like downtown Bow Tie Movieland 6 here in the heart of Downtown Schenectady,” Assemblyman Angelo Santabarbara said. “That’s why I’ve supported this initiative over the years and I’m happy to see it finally become a reality — it not only gives these businesses the ability to better serve our community by offering alcoholic beverages to enjoy during the show, but also helps boost our local economy during New York’s ongoing economic recovery.”

On the Bookshelf: Make time to read

Mr. D’s opens at the Desmond