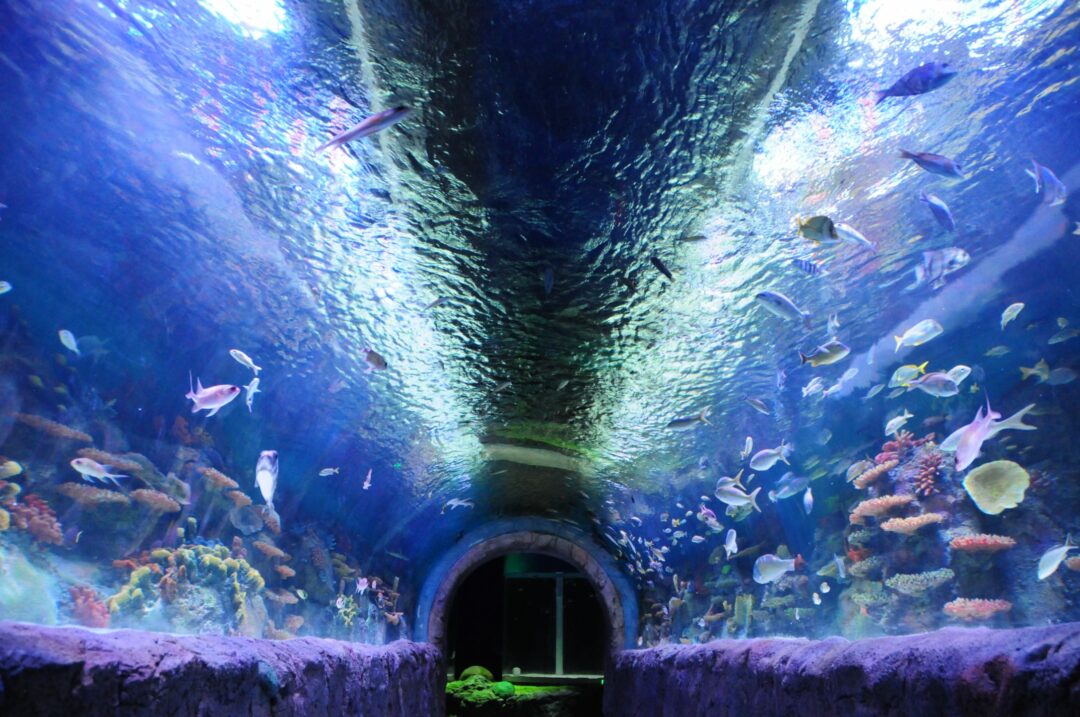 The tunnel aquarium holds 15,000 gallons of water, with an estimated weight of 60 tons. (Photo by Michael Hallisey / TheSpot518)

SCHENECTADY — A year’s worth of anticipating the opening of the Via Aquarium has finally come to an end.

“It’s been a challenge,” said Via Aquarium Director David Gross, who shared that it took longer than expected to get the aquarium operational. Each of the exhibits built into the 25,000 square foot attraction was fabricated overseas, and to be reassembled here. Two obstacles factored into the delay, language and the metric system. “The life support systems are in Turkish, and in metric. And, we have U.S. pumps that are in inches. A lot of the lighting, for example, were also Turkish and they weren’t wired to U.S. code.

“It would almost be easier starting from scratch,” he said.

Nevertheless, the aquarium opened to much fanfare on Saturday, Nov. 12. More than 2,000 people on Facebook voiced their plans to attend opening day. And, according to Viaport spokesperson Alan Fanitzi, nearly 10,000 people expressed interest over social media.

Almost immediately aquarium patrons can expect to forget the retail stores that once occupied this corner of then-Rotterdam Square Mall. Exhibits ranging from virtual reality tours of our planet’s oceans, to a petting zoos where kids can get up and close to cownose rays and southern stingrays. Kids receive a passport with the intent of earning seven stamps as they traverse through this underwater safari comprised. In all, Gross said nearly 1,000 different species are displayed in 37 exhibits, all requiring about 75,000 gallons of water. “And, we’re still adding more. I don’t have a final count just yet.”

Patrons are guided through a “natural” path — river bed, sand and ocean — that Gross said should take them more than an hour to complete. Aside from looking for clown and trigger fish, there’s adventures along the way. One such adventure has visitors picking out trash from their river pathway. Towards the end, visitors walk under 60 tons of water in a tunnel aquarium featuring various sharks, eels and exotic fish.

“The whole idea is to get people connected to the world of water, and realize we are downstream from somebody else, and upstream from a whole bunch of other things, too,” said Gross. “We’re trying to sneak some education in there while you’re having fun.”

Prior to Viaport’s acquisition of Rotterdam Square Mall last year, the retail space suffered from stores vacating the 28-year old mall. In 2013, Deloitte Consulting revealed more consumers chose to shop over the internet than traditional brick and mortar. That trend has not stopped since. Today, Viaport and neighboring Crossgates Mall have aggressively pursued entertainment venues — nightclubs, comedy clubs and adult playrooms involving arcades and bowling alleys. Providing people the attractions they can’t find at home has taken priority, said Gross.

“There are several other aquariums in malls across the country,” said Gross. “The idea was to add entertainment to the mall, to bring people back. Because, online shopping has really challenged the big box stores like Macy’s and Sears. … You can’t get this kind of entertainment from home from your computer or t.v.”