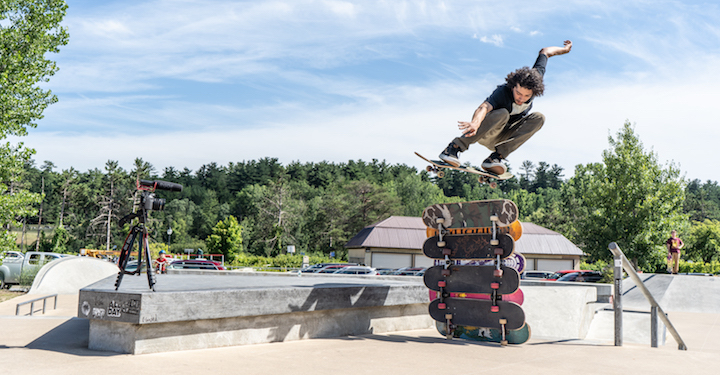 LAKE GEORGE — Frank Cavone’s Mirth Films has established itself within the local music scene over the past several years, but the passion for filmography was sparked by a love for skateboarding.

This weekend, Cavone and his partners will meld the music and skateboarding communities together in the inaugural Wild in the Trees Music & Skate Festival at Lake George Skate Plaza at Charles R. Wood Park on Saturday and Sunday, Oct. 1 and 2.

The two-day event features local music and skateboarding competitions to celebrate the community’s effort to embrace and raise money for the Lake George Skate Plaza. All ticket sales from Wild in the Trees will be donated to the Ronald McDonald House of the Capital Region.

The marriage of the two communities is not an odd pairing. Cavone said his musical taste branched out from having watched skateboard videos featuring pioneers like Tony Hawk.

The lineup is full of music he said he’d skate out to at the park.

The lineup covers the musical spectrum from jam bands to punk, alternative and more, featuring Annie in the Water, Glass Pony, Neon Avenue, El Modernist, The Sugar Hold, The Hauntings and The Skunches.

The skateboarding competition, sponsored by Seasons Skate Shop, will feature a range of different events. All competitions include a spot-based jam session, best trick, high ollie, game of S.K.A.T.E and Skate -or- Dice. For more information, visit Mirth-Films.com/WildInTheTrees.

“Wild in the Trees is our way of paying homage to all efforts made to raise money to build the Lake George Skate Plaza while embracing all the incredible musical talent regionally and beyond,” Cavone said.

Local skateboarders approached Lake George with the idea of erecting a skate park in town in 2008. After several town board meetings that included testimonies from skaters, family members and community leaders, the town encouraged advocates to start raising funds.

Back in 2008, local skateboarders in Lake George, brought to the town’s attention the need to have a skate park. Through various town board meetings and the creation of a skateboarding committee put together by skaters, family members and community leaders, it was time to raise money to make the dream come true.

“If things go to plan, then we just want to continue doing this and and hopefully get younger skateboarders involved with what’s going on,” Cavone said, “We want to provide kids with a safe place to skate and we want to bring people together so that if you didn’t know each other before, now, you might have somebody you can go skateboard with that you met at the Wild in the Trees Music and Skate Festival?”