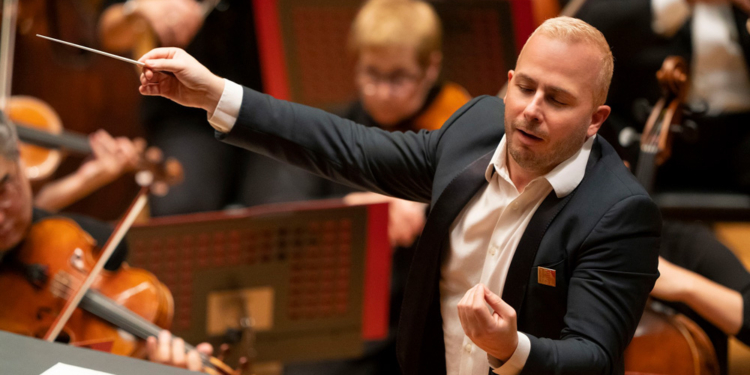 SARATOGA SPRINGS — The Philadelphia Orchestra will return to Saratoga Performing Arts Center with performances that reflect its commitment to IDEAS (Inclusion, Diversity, Equity, and Access Strategies), starting with BalletX performing alongside the Orchestra on Wednesday, July 27.

The next evening, the Orchestra will perform the East Coast Premiere of Pulitzer Prize–winner Kevin Puts’s Contact for string trio and orchestra, a SPAC co-commission, featuring the ensemble Time for Three. The concert will also include the SPAC premiere of Missy Mazzoli’s Sinfonia (for Orbiting Spheres) and Dvořák’s Symphony No. 9 (“From the New World”) (July 28). Both concerts will be led by Assistant Conductor Erina Yashima.

Renowned violinist Joshua Bell and soprano Larisa Martinez will join the Orchestra for “Voice and the Violin,” an evening of romantic arias and modern classics by Berlioz, Mascagni, Sarasate, Verdi, and Bernstein, among others, led by conductor Michael Stern (July 29).

Conductor William Eddins will lead the Orchestra through three concerts in week two, beginning with Ledisi in a Tribute to Nina Simone (Aug. 3). The following evening will include The Philadelphia Orchestra and SPAC premieres of A Lovesome Thing: Billy Strayhorn Suite, co-commissioned by SPAC, and the SPAC premiere of Florence Price’s Piano Concerto in One Movement, both featuring pianist (and NPR host) Lara Downes in her Orchestra and SPAC debuts (Aug. 4). Acclaimed cellist Yo-Yo Ma will return to the SPAC stage for the first time in five years to perform the Aria from Villa-Lobos’s Bachianas Brasileiras No. 5 and Saint-Saëns’s Cello Concerto No. 1 (Aug. 5).

Audiences can also enjoy Saturday evenings at the movies with live-score performances of Harry Potter and the Prisoner of Azkaban (July 30) and The Princess Bride (Aug. 6).

Music Director Yannick Nézet-Séguin will join The Philadelphia Orchestra for the final week, with performances of Beethoven’s Symphony No. 5 and Iman Habibi’s companion piece, Jeder Baum spricht, commissioned by the Orchestra (August 10), as well as Beethoven’s Symphony No. 3 (“Eroica”) alongside Jessica Hunt’s Climb, another Orchestra commission, and Bruch’s Violin Concerto No. 1 with Randall Goosby making his Orchestra and SPAC debuts (Aug. 11).

Soprano Angel Blue will also make her SPAC debut, lending her stunning vocals to Barber’s Knoxville: Summer of 1915 and Coleman’s This Is Not a Small Voice, a Philadelphia Orchestra commission that was given its world premiere in February 2022 (Aug. 12).

The three-week series will conclude with a triumphant performance of Beethoven’s Symphony No. 9 featuring Angel Blue, Jennifer Johnson Cano, Russell Thomas, Ryan McKinny, and the Albany Pro Musica chorus. Philadelphia Orchestra Composer-in-Residence Gabriela Lena Frank’s Pachamama Meets an Ode, an Orchestra commission that draws inspiration from Beethoven and from Frank’s Peruvian culture, will be given its SPAC premiere. The evening will culminate with a fireworks display (Aug. 13).