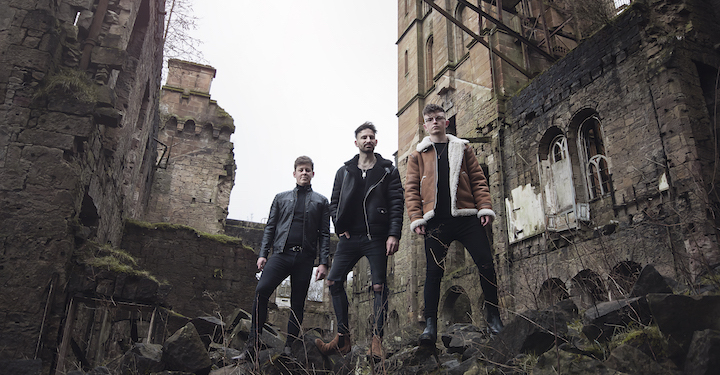 SARATOGA SPRINGS — Talisk’s Mohsen Amini plays the concertina like a mad man with the Devil in his hands.

The sound of the squeezebox that otherwise conjures visions of tranquil streetside cafes in Paris is anything but calming while in his hands. He damn near wrestles with the thing. Of his own admission, he goes through one every year or two. When he’s flanked by Graeme Armstrong on guitar and Benedict Morris on fiddle, the trio produces music that gets you moving.

The trio launched its U.S. tour with a show in early February. The Dawn Tour is a 25-stop jaunt that took them down the West Coast and across the plains before its Thursday, March 10 show at Caffé Lena in Saratoga Springs. The flight to Alaska was marred with mishaps, offset only by the news of the band’s latest album hitting the stands following their first night on the road.

“We’ve had one show and 14 disasters,” Amini said, joking the morning following their first stop in Valdez, Alaska. “I like those odds, but it’s been great. It’s been great. … They’re all selling out and we’re having a brilliant time.”

Talisk is classified as a traditional Scottish folk band, but for Americans, that kind of moniker can be misleading. Whereas the folk label may lead prospective audiences to assume storytelling with musicians playing acoustically from inside a round, Amini, Armstrong on guitar and Morris are together something of a different animal.

First, there is no storytelling.

Second, you’ll be dancing in some way or fashion before the night is through.

The band has ranked highly amongst the most in-demand folk-based groups since it was formed in 2014. Following its critically acclaimed debut, “Abyss,” Talisk’s sophomore album, “Beyond,” quickly amassed five-star reviews and rose to No.1 in the iTunes world music charts despite a late release in 2018. Since then, the Glasgow trio has stacked major awards for exhibiting an explosively energetic sound. Accolades include Folk Band of the Year at the BBC Alba Scots Trad Music Awards, a BBC Radio 2 Folk Award, and the Belhaven Bursary for Innovation.

“Coming into the band it’s really important that the sound of the band start’s sounding the same,” Morris said. As he continued, he struggled to find the right word on what was next important. (Amini provided a helping hand and said, “[adding] his own flare.”)  “Everything fell into place so well, it’s been great so far.”

Morris came in towards the end of the band’s new album. He came in after they had filmed the band’s first video “Aura,” which still features Keenan on fiddle. Nonetheless, the clip features the band in a spacious studio supporting an up-tempo track that’s an instant toe-tapper. Each seated in line with Amini clad in a black leather jacket and ripped jeans. Everything from their sound to their appearance places Celtic folk firmly in the 21st century.

The concertina is no stranger to traditional Celtic music, whether you’re talking about music from Scotland or Ireland. It originated simultaneously in England and Germany more than a century ago. Amini was introduced to it when he was 10. He told the Henley Standard how he and his sister were attending Irish step dancing classes when a group of musicians. The group shared it with him and he learned enough to play a tune.

“Nobody wanted it, and they just gave me it,” he said, calling it the black sheep of the family. They gifted it to him, and he’s been with one ever since. In 2018, while playing between three bands, he was named Musician of the Year at the annual BBC Radio 2 Folk Awards.“I was stuck with it for ages. But I fell in love with it. I absolutely adore it.”

Amini’s setup has his concertina tethered to various effect boxes by two lavalier microphones used more often with concert pianos. The effect boxes at his feet are what you’d see any guitarist using at a club, including a sampler and synth box to manipulate the octaves. With the right combinations of buttons, he can have his handheld instrument sounding like a church pipe organ.

Armstrong has bounced back and forth but has been with the band through most of its years. He admits to having every guitarist dream, playing guitar for a rock and roll band. His first mention was The Beatles.

“It hasn’t always been my jam,” he said. “But for the majority of my life, it’s been my thing. But I still play all the classics. I have a strat at home and I love playing it.” His electric guitar is featured often on this album. Some of the tracks even sound like something you’d hear at Webster Hall in New York City’s East Village. Give the album’s last track “Dystopia, Pt. 2” a listen and hear for yourself.

“Trad music’s been my thing forever,” Armstrong said. “But there’s still the rock star in me, waiting to come out.”