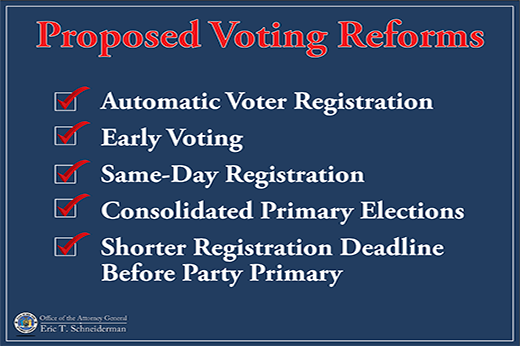 “Any law that makes it easier to vote is a good law; any law that makes it harder to vote is a bad law,” said Schneiderman. “New York has long been a bastion of democracy, but our state’s current system of registration and voting is an affront to that legacy. The New York Votes Act will help our state become a national leader in protecting and expanding voting rights for New Yorkers.”

“I am pleased to be working with Attorney General Schneiderman on the New York Votes Act,” said Cusick. “This legislation, aimed to simplify the voting process and improve voter accessibility, will give citizens a better opportunity to participate in the democratic process by increasing voter participation across New York State.”

Many of the provisions in New York Votes Act arise directly from the findings of the Attorney General’s December 2016 report on the problems that voters faced during the 2016 presidential primary and general elections. The inquiry, which was undertaken in response to record voter complaints during the April primary election, found that voters encountered barriers to access erected by New York’s restrictive voting laws, rules and procedures, as well as by the practices and administrative errors of state agencies and the Boards of Election.

Key provisions of the bill include:

“New York State ranks abysmally low on voter turnout, and that is the direct result of generations of red tape, voter disenfranchisement and antiquated registration systems,” said Senate Democratic Leader Andrea Stewart-Cousins (D-35). “The Senate Democrats unveiled a series of bills to help address this problem, and we thank Attorney General Schneiderman for his dedication on this issue. Our democracy requires active participation from all citizens and together with Attorney General Schneiderman, we will keep up the fight to achieve that goal.”

“Voting rights are the foundation upon which we build our democracy,” said Assemblyman David Buchwald (D-93), chairman of the Assembly Subcommittee on Election Day Operations and Voter Disenfranchisement. “I thank Attorney General Schneiderman for putting forward a bold set of election law reforms. I will gladly work with my colleagues in government to improve our voting system.”

“The League of Women Voters of New York State applauds Attorney General Eric Schneiderman for this comprehensive voting reform package,” said Barbara Bartoletti, Legislative Director for the League of Women Voters of New York State. “New York State continues to rank near the bottom in terms of statewide voter turnout – especially for primary elections. Laws that would allow for automatic voter registration, early voting, no-excuse absentee voting, and consolidation of primary elections will empower voters and give greater access to the ballot. We urge the Governor and Legislature to act on these reforms as soon as possible to ensure future elections do not face the same barriers as the 2016 primary and general elections.”

“New York ranks consistently as one of the nation’s worst in terms of voter participation, driven by state laws that create obstacles to voting,” said Megan Ahearn, program director at New York Public Interest Research Group (NYPIRG). “Much of the rest of the nation has developed practices that improve voter turnout.  The Attorney General’s package relies on those best practices. NYPIRG applauds his sweeping response; one that modernizes state voting laws with an eye toward making participation easier, not harder.”

“With one of the lowest voter turnout rates in the country, New York needs to modernize its outdated elections systems so that more eligible New Yorkers can register and vote.  Automatic voter registration stands to add millions more voters to New York’s rolls, and implementing it at agencies beyond the DMV would make our state a nationwide leader.  Adding early voting days, including on weekends, would make it significantly more convenient to vote—for some people, it could make all the difference in whether they are able to cast a ballot at all,” said Chisun Lee, Senior Counsel for the Democracy Program at the Brennan Center for Justice. “The Brennan Center applauds the Attorney General for his leadership in calling on the State to bring its elections into the 21st century.”

Last month, the Office of the Attorney General (OAG) intervened in a federal lawsuit against the New York City Board of Elections (“NYCBOE”), alleging that widespread policies and practices used by the NYCBOE to cancel voter registrations violate federal and state laws. Specifically, the lawsuit alleges that since 2014 the NYCBOE improperly purged over 200,000 voters’ registrations and, as a result, disenfranchised many voters during the 2016 Presidential Primary.

Since 2012, OAG has entered into agreements with eight counties aimed at ensuring that Spanish-speaking voters have equal access to the electoral process. The agreements specifically ensure that the local BOEs have Spanish-language voter registration forms, absentee ballot applications, affidavit applications, public notices, website information, polling place reassignment letters and the Election Day ballot itself. In addition, the Boards also agreed to recruit and identify sufficient numbers of Spanish-speaking poll workers and agreed to provide enhanced training for poll workers to ensure that quality language assistance is provided on Election Day.

OAG has also operated its Election Day Hotline since November 2012.  The Hotline — reachable at 800-771-7755 — has fielded hundreds of complaints from voters across the state and worked with local election officials and others to promptly address issues encountered by voters at the polls.

Attendance at Thatcher Park nearly doubles from 2015 to 2016