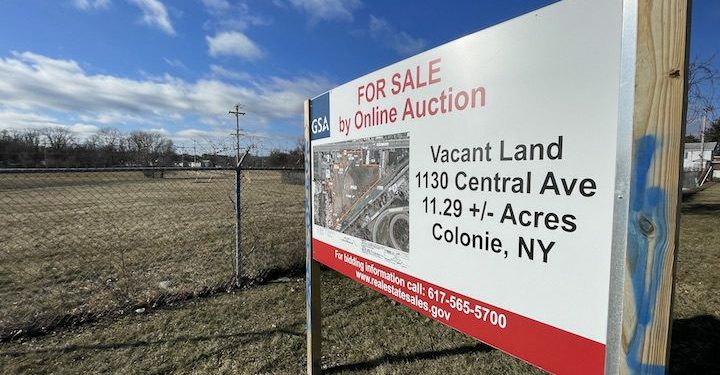 COLONIE — Who would buy 11 acres of a former Superfund once polluted by remnants of enriched uranium?

Don’t know yet, but it’s known they’re willing to pay $2.15 million for the property.

The former National Lead Industries property at 1130 Central Avenue was on the auction block up until the federal government closed the bidding process last May. All bids for the property were submitted anonymously throughout the process. The Albany Times Union attempted to learn the winning bidder’s identity, but as of last week, that has remained secret.

The land has been vacant since the New York State Supreme Court ordered National Lead to close down the plant in 1984 due to concerns over airborne uranium releases.

According to a running history documented by the U.S. Department of Energy, the lot has been associated with industrial operations since at least 1923. Prior to National Lead purchasing the property in 1937, the facility produced benign wood products and toys before converting to a brass foundry for railroad components.

National Lead proceeded with electroplating operations before earning a contract with the Atomic Energy Commission in 1958, where the company then started to produce products from uranium and thorium. The plant handled enriched uranium from 1960 until its contract with the commission ended in 1972. After which, the plant proceeded to fabricate shielding components, aircraft counterweights, and artillery projectiles from depleted uranium.

The Department of Energy states that bits of depleted uranium were released into the surrounding environment through the plant’s exhaust stacks, spreading the radioactive material to neighboring buildings. The industrial operations were blamed for contaminating the surrounding soil, as well as 56 commercial and residential properties.

When the plant was shut down in 1984, Congress assigned environmental cleanup to the Department of Energy, which then acquired the site. From 1984 to 1997, the Department of Energy investigated the vicinity properties, on-site structures, groundwater, and surface and subsurface soils. The government then developed a plan that removed radiologically impacted soils and removed on-site buildings, as well as stored subsequent waste materials generated during the cleanup.

The term Superfund references the Comprehensive Environmental Response, Compensation and Liability Act of 1980. Within the law, a trust fund was established by Congress to finance hazardous waste sites in need of long-term cleanup.

Over 30 years, the Department of Energy and the U.S. Army Corps of Engineers spent approximately $190 million during the cleanup effort.

The $2.15 million price tag is a relative bargain compared to surrounding properties. According to Realtor.com, a 1-acre lot in the 1900 block section of Central Avenue has an asking price of $975,000. But, location is a key factor in determining real estate value. In Guilderland, a 50-acre lot on New Karner Road is currently pending at $750,000.

The former National Lead property could serve as a means of traffic mitigation. Colonie Director of Planning and Development Sean Maguire had said the town reviewed a possible Railroad Avenue extension, leading to Central Avenue and Osborne Road.