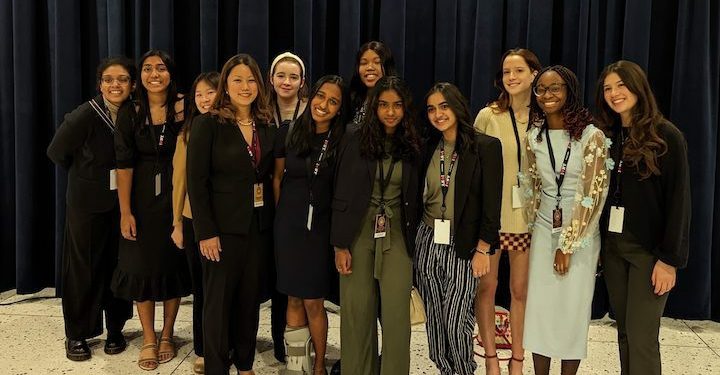 ALBANY — It all started a mere few weeks ago as an opportunity called First Amendment-First Vote (1st A-1st V), which aims to help young women realize that they can someday run for political office.

A group of Shaker High School girls and teachers gathered for a kick-off event of the unique, interactive “outside-the-classroom” enrichment program.

It quickly grew into being a part of an important moment in New York state history: the inauguration of New York state’s first woman governor, Gov. Kathy Hochul.

A dozen Shaker students, along with North Colonie teachers and administrators, attended the milestone event at the Capitol on New Year’s Day.

Deputy Superintendent Kathleen Skeals, who will become the North Colonie superintendent on Feb. 1, learned over the summer that the non-profit, non-partisan group 1st A-1st V has schools in 10 regions in the state and 150 girls statewide participating.

“I knew immediately I wanted our district to participate,” Skeals said. “And as it turns out, our district is the only district in the region that participated this year! Because we were the only group, we were allowed to bring 25 girls to the first seminar.”

The student participants expressed interest in the program and were recommended by a teacher. SHS social studies teachers Saskia Dolan, Andrea Stupp, and Christine Butry are the teacher coordinators.

The keynote speaker at the kick-off seminar, which was held in late 2022, was NYS Office of General Services Commissioner Jeanette Moy, who was so impressed with the SHS contingent she invited a small group of them to the state Capitol to record video messages. The goal was to create videos that would be played at the inauguration and spoke to how important it is for them to see the first female governor of New York.

An exciting surprise: Being
a part of history

Following the successful video shoot was another exciting surprise. The Governor’s Office extended an invitation to the entire SHS group to attend the inauguration.

1stA-1st V’s Board President Melina Carnicelli Board President said, “1stA-1st V is thrilled to be represented by Shaker High School students at Governor Kathy Hochul’s historic inauguration as New York state’s first elected governor to be a woman. The North Colonie School District is 1stA-1stV’s first Capital Region district to join our statewide cohort, and Shaker High’s girls participating this school year are exemplars of the young women in our program who aspire to leadership roles in governance, including elected office… even as a future successor to Governor Hochul.”

“Everyone there definitely knew how much of an important moment it was – how it was a big step for womankind,” said SHS junior Maya Kantimahanthu.

Senior Essence Kelsey said the experience may encourage her to pursue political office. “After attending the inauguration it made me realize maybe that is something I might want to do,” she said.

“It was so exciting to see our girls on the screen when their video was played at the inauguration,” said Skeals. “They were active participants in a milestone event. I am incredibly proud of what the students and teachers involved in 1stA-1stV have already accomplished. This is certainly a group to watch.”

In late spring, the group will meet with other 1st A-1st V students from across the state in Seneca Falls to share plans and further develop the leadership potential of the participants.