Safety is among the three Rs in school 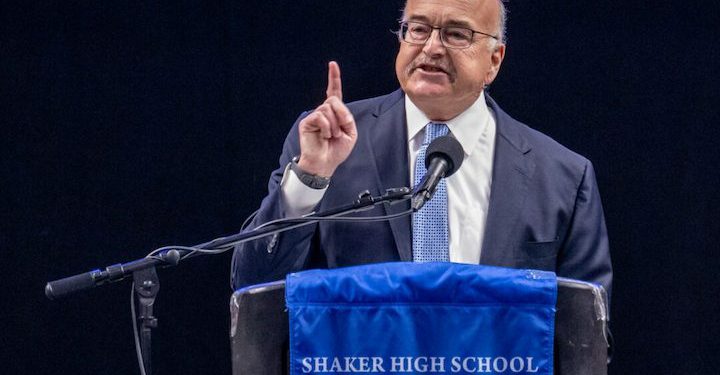 The topic of the meeting was originally scheduled to discuss community safety and well-being. Joseph Corr took the first few moments before the presentation the admonish the vandalism and acts of racism depicted at Forts Ferry Elementary last weekend. It nonetheless fit right into the subject for the night.

The superintendent introduced a presentation identifying what he called a “three pillar” foundation for academic excellence, all of which pertained to establishing a supportive environment promoting engagement, safety and environment.

North Colonie Police Lt. Todd Weiss described his agency’s relationship with the school district as a particularly good one. Last summer he and his officers worked with district administrators, including Facilities Director Brian Kraft, to build upon safety strategies. The assessment included learning the teaching staff’s expectations and recognizing specific features of the building in the case of an emergency.

“All of this was discovered during one of our lockdown drills that we had at the Middle School. …  What we turned into a summer-long project,” said Weiss.

While observing the events surrounding the Robb Elementary shooting in Uvalde, Texas, Weiss said Corr and Kraft provided his police agency with access to each building to devise strategies that include steps from iloveyouguys.org’s Standard Reunification Method.

The SRM provides school and district safety teams with methods for planning and practicing a comprehensive response plan that involves more than the district and police agency in the event of an emergency. It’s described as a “predetermined, practiced reunification method” that Weiss said would be a countywide response.

According to the website, SRM relies on site-specific considerations, so successful planning and implementation demands collaboration with administration and responding agencies. A plan for reuniting students and parents is the responsibility of schools and districts to maintain the chain of custody for every student.

According to the police department’s website, the department’s SAFE Schools Initiative provides classroom instruction on school violence and crisis response, and tabletop training for school Crisis Response Team members. This training involves roleplaying through a mock crisis scenario at the school, including help from emergency medical services, fire services and school personnel.

Corr expressed his confidence in the police agency, sharing that whenever the school receives a threat, he’s speaking with Weiss.

Kathleen Skeals, the district’s deputy superintendent of schools, conjured the pandemic while speaking with parents about what strategies teachers employ to build a safe environment for children.

Skeals said the pandemic affected those relationships while students learned virtually, and has observed teachers’ relationships with students and parents getting better since. She attributes that also to the work from and research by the School Safety Committee and the school resource officers supplied by the Colonie Police Department.

“I know we’re talking about events and we immediately go to what’s in the news like school shooters… Well, I also want us to think about the things that happen every day to promote the safe-and-healthy environment,” she said. When educators observe a change in behavior, she said they have those conversations with parents and guardians.  “In all honesty, that starts with the classroom teacher. … Teachers notice those things.”