Municipalities are scrambling to find other places to bring animals

Bethlehem and Colonie among those affected 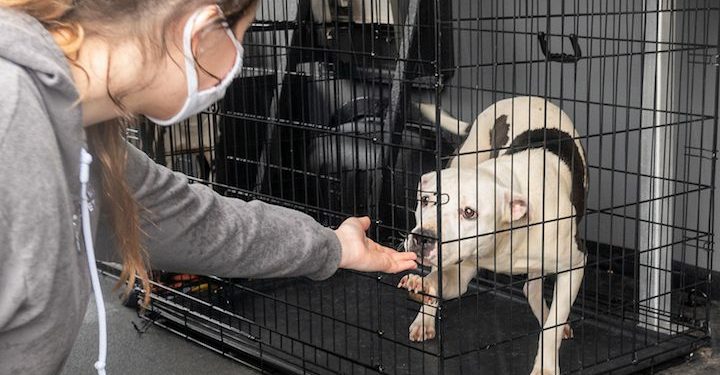 COLONIE– A decision by the Mohawk Hudson Humane Society to stop taking stray and abused animals from a number of municipalities has law enforcement wondering what they will do with the stray and neglected K9s and cats.

One potential answer, being explored by Sheriff Craig Apple, includes converting an old garage at the jail in Colonie into kennels, and having the inmates help care for the animals.

It is, by state law, a municipalities’ responsibility to find a suitable home for animals in its custody. State law also dictates the manner in which the animals are kept. For years, the go to for police departments in Albany and Rensselaer counties has been the MHHS. But, earlier this month, the shelter with a home in Menands said it is cancelling the contracts with 15 municipalities because it doesn’t have the space or resources to deal with the spike in animal intakes.

“This year, MHHS is projected to intake 1,198 dogs, that is 29 percent more than 2021,” according to a statement by the society. “The average length of stay for each dog is 24 days. Stray animals and animal cruelty cases are only expected to increase in 2023. MHHS is unable to safely shelter that many dogs.”

At the end of the year, 15 municipal police departments will have to either care for the stray and abused/neglected animals themselves or find another place to take them. Whatever the alternative, it will likely be more costly than MHHS. Right now, the municipalizes pay MHHS $100 to take a dog for the first day and $70 per day after that for five days while it is technically the municipalities’ responsibility.

After five days, if nobody claims the animal, ownership is transferred to MHHS which then must cover the costs of veterinary care, food and handling of the animals, including providing 35 minutes a day of enrichment time.

“In order to adopt the dog out, you have to have a vet look at the dog, the dog will have to have certain shots and there has to be a behavioral analysis done. And that doesn’t include caring for the animals prior to adoption. I don’t know how we are going to do all that. It is going to be a huge cost to the municipalities if we have to do it. Are we going to have to euthanize healthy dogs?” said Bethlehem Police Cmdr. Michael Cozzy. “This is going to be potentially disastrous if municipalities cant come up with solutions and I don’t know if we can get a solution in three months.”

Bethlehem police took 26 dogs to MHHS over the past calendar year and pay on average between $10,000 and $12,000 a year. But, Bethlehem is just one of 15 municipalities who will see their contract end at the end. And dogs are just one type of animal brought to MHHS by municipal police departments.

In 2021, Colonie brought 101 dogs and cats — alive and deceased — to MHHS and paid $15,595, said Lt. Daniel Belles. Earlier this year, Colonie “forged a relationship with Boght Veterinary Clinic to take in some of our animals.”

“While we do not use their facility exclusively for all animal needs, they are one of the providers that we relied on quite often, and we have enjoyed our working relationship for many years,” he said. “We are exploring what options we have available to us for next year. Our goal is to provide uninterrupted quality care for animals, especially those that are abused and neglected, so we will make all efforts to ensure this happens.  At this time, there is no clear solution.”

Other municipalities that will see their contracts expire at the end of 2022 include New Scotland, Guilderland, Knox, and a number in Rensselaer County.

In 2017, MHHS opened a new $7.2 million, 32,000-square-foot facility off Broadway in Menands after it outgrew its old building.

“My real issue with MHHS is they just built the $7.2 million building and they don’t have room for more than 86 animals. Isn’t that the whole point of the building?” Cozzy said. “They said they will help us, but by law the municipalities are responsible for the animal and MHHS is not. It’s a wonderful facility and they give us three months to find something else. This is lunacy. There are going to be dogs running loose everywhere.”

Whitney Philippi, the vice president for development at MHHS, said the contracts call for 30-day notice to cancel and the main issue with the municipal contracts is the spike in the number of animals and limited physical capacity.

“The number of intakes this year have risen pretty drastically, and it is across New York state and we can’t safely shelter that many animals going forward,” she said. “We chose those 15 because some have three animals a year and some have 30 versus Albany or Troy who have hundreds and it will be easier for them to find alternatives for their sheltering needs and we are working with the larger ones going forward. Ultimately, we would like to see more kenneling options in the area.”

The state law that specifically holds the local municipality responsible for the animals does not apply to counties, but Apple said he is exploring the possibility of converting a large garage at the jail into a kennel for the municipalities in Albany County.

And, he said, there is a ready source of labor to help care for the animals — the inmates.

He said the idea has been bantered about for a few years but was put on hold — like the rest of the world — during COVID. Now, though, it is back on the front burner.

In the rural areas, dogs and domestic animals are an issue but so are horses, cows and sheep. The county is currently building a facility to house those and other types of farm animals but dogs and cats will become a problem for municipalities in two months.

His project is logical on its face but it is not an inexpensive endeavor considering the state rules and regulations it will need to follow including veterinary care. He said recently his deputies conducted an eviction and while nobody was at the apartment there were two kittens left behind. They took the kittens to a vet and received a $1,700 bill that was negotiated down to $1,400.

“We were trying to do the right thing here and we got a $1,700 bill and that was for two small cats. What is going to happen when you get the cat hoarder or the dog hoarder. It’s going to be brutal,” he said. “When times get tough, one of the first things people do is putting their dogs up for adoption because they can’t afford to feed it or care for it and where do the dogs and cats go and who cares for them.”

Philippi said MHHS is ready and willing to work with the sheriff and has visited the site. She said while the idea certainly has merit, it will not be cheap or easy to get it up and running.

Apple, though, who has converted part of the jail into a homeless shelter and has done other out of the box undertakings with inmates, said the idea of using them to help care for the animals is a win/win but added it is too early to put a timeframe or a price tag on the idea.

“It could be good for municipalities, it could be good for the animals and it will keep the inmates busy and when they are busy they aren’t planning to escape or thinking about other things like hurting a CO or each other,” he said. “But it is nothing I can do tomorrow.”