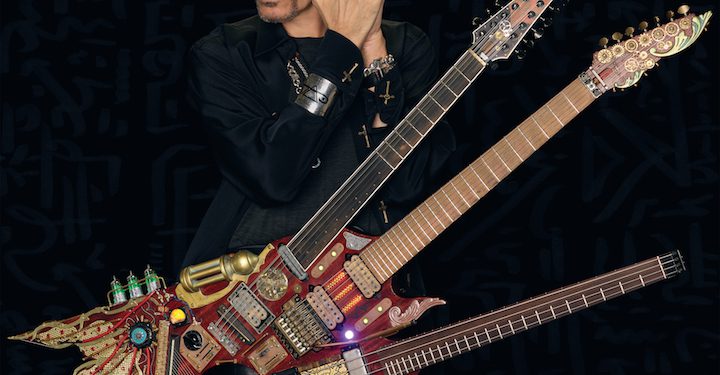 ALBANY — Steve Vai plays the guitar like a man who brokered a deal with the Devil.

There’s some truth to the analogy. In a small window of time, after parting ways with Frank Zappa’s band, Vai joined David Lee Roth’s first venture outside of Van Halen. In a dream lineup that included bassist Billy Sheehan and drummer Gregg Bissonette, the superband jumped out with Vai’s talking guitar to open “Yankee Rose.”

In a small window of time, Vai was also featured in the Ralph Macchio cult classic film, “Crossroads.” In the 1986 film, Macchio’s Eugene Martone is obsessed with the talent and stories surrounding blues legend, Robert Johnson. The real-life blues guitarist died at 27, stirring stories of the man having made a deal with the Devil to obtain his ungodly talent. In search of Johnson’s “lost song,” Martone crosses paths with Jack Butler, played by Vai.

The two duel in a mystifying, high-stakes wager that continues to draw in aspiring guitarists today. But it’s all Hollywood magic, to some extent. Aside from a bit of slide guitar from Ry Cooder, Vai performs both sides of the battle.

On Saturday, Vai promises to feature an abomination of an instrument as he stops to play at The Egg on his tour to support his latest album, “Inviolate.” Called The Hydra, the design of which is from his own imagination, sporting three fretboards in a radial arrangement as its most obvious feature. It’s not the most intuitive of tools.

First of all, I need to ask you this. How was Rio? I understand you just got back or are you still there?

Steve Vai: No, I got back a while ago. It was so great. It was kind of like a cakewalk, you know. I’ve known the guys, Living Colour for decades. Fabulous guys. Fantastic musicians and I’ve toured with them actually for an Experience Hendrix tour. They were the band. And, it was so nice to be invited to come down to Rio and just jump on stage with them for like four or five songs. Iit went great. You know, it was a different kind of a trip for me because usually, I’m there with my band and there’s a lot more responsibilities and hustle and stuff like that. But this was just like a piece of cake.

So you were able to enjoy yourself.

Vai: I did, I did. My wife and I just walked along the beach.

Oh, that sounds awesome. It was my first opportunity to hear you play after hearing that, you know, you suffered an injury. You sounded great. Are you at 100% now?

Almost, you know. I had shoulder surgery. I tore stuff in there and I’m on the mend. And I’ve already toured with, you know, the healing process. It takes about a year. So I’m almost 100.

What kind of challenges does that present to you and what kind of prep work do you have to do to limber yourself up?

Well, the one thing that was compromised for the first months was playing the Hydra guitar. I couldn’t get my arm over it, or wield it. Some of the things that have been a little slow to recover, like strumming, like fast strumming. I used to be able to do that pretty bulletproof, but I think it’ll come back. It’s just one of those things you have to put on your radar. I gotta be careful of how violently I attack the whammy bar, you know? That’s all shoulder work. Maybe that’s how I got it in the first place. Who knows? But it’s coming along and I don’t feel that anything is being compromised now with the performance.

Now, speaking of the Hydra, I’m looking at a picture of it, it’s like three fretboards on here. It’s crazy looking. I’m looking at the press release where you’re describing how it came to fruition, but seriously, how did you come up with this?

Well, it’s the kind of thing where if you’re lucky enough when you’re young to find something that’s really interesting and compelling to you,, and you just stick with it your whole life, you’re gonna continue to evolve in that. Tthrough the years, I’ve just played the guitar and I’ve written music and I’ve always loved that, and I’ve always kind of searched in my mind for quirky, interesting, entertaining, engaging things. And I think I always saw myself playing some kind of multi-neck guitar; a piece of music that was complete within the guitar itself, you know? And all the necks were integrated in one performance. So it really just started out as a visual in my mind, and that’s how everything creative starts out for anybody, I think. And then, you just kind of chip away at it and next thing, you know, there it is.

It’s amazing looking, We’re able to see how your imagination works through this vision and have it come to fruition, it’s really amazing to see that.

It’s nice, because I’m so into the guitar and what it’s capable of doing. When it came time to design the Hydra, all the little accoutrements were just sort of sitting in the back door of my mind. So I know what it’s gonna do as we’re building it, but it was, it was a long process. It took like five years.

What that guitar can do is based on imagination in the mind of the person wielding it. But one of the obvious things — it has a base neck. So now you can play bass on it. It’s got 12 strings. So that neck I use for textures and harmonic structures. And it’s got all those harp strings, 13 harp strings that you can tune a particular way and they create like a sympathetic resonance. And then it’s got the seven-string tuned down neck. So you’ve got all these options and it’s got all sorts of functions. It’s got a guitar synthesizer in it, sample and hold, it’s got piezos and sustainers. So knowing everything that’s there and setting out with the idea of incorporating everything on the guitar in one performance, all at the same time, basically, that was the goal. So that you can do that you can’t do on a regular guitar. You can play bass, rhythm, lead — all of these things at once on separate necks. It’s kind of like a glorified Rubik’s Cube.

Municipalities are scrambling to find other places to bring animals