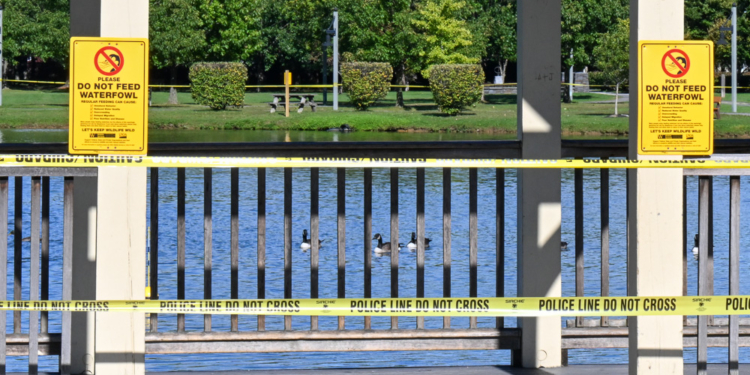 A popular spot at The Crossings is closed with caution tape. (Jim Franco / Spotlight News)

COLONIE — The town now knows what is killing the birds at The Crossings — Highly Pathogenic Avian Influenza, or Avian flu as it is more commonly known.

Supervisor Peter Crummey said he was notified by the National Veterinary Services Laboratory on Thursday, Sept. 29. Out of an abundance of caution, he said, the walking trails around the pond will remain closed.

He is also reiterating the warning found on a number of signs surrounding the pond asking people to not feed the waterfowl. As unsubtle as the warnings are to people of the negative consequences feeding birds has, the signs are still routinely ignored on any given day.

“It is not a good idea any time but now, with the Avian flu being highly contagious, feeding the birds brings more to the pond and exposes more birds to this fatal disease” Crummey said. “We will continue to work closely with the New York State Department of Environmental Conservation in monitoring the situation.”

The threat to humans and pets is small, but the supervisor is also warning people to avoid any bird feces that are commonly found near the pond to avoid spreading the disease past the flock that frequents The Crossings.

In April, the DEC sent out a public advisory about the prevalence of Avian flu in New York. This strain likely came from Europe, where it has been circulating since 2020. It was first detected in North America in November, 2021 and expanded rapidly in March, 2022, according to the DEC. In February, the first New York case was found in a domestic flock in Suffolk County.

It can impact a number of species, wild and domestic, including Canada geese and the ducks that frequent the Crossings. Earlier this year, a great horned owl and a bald eagle were diagnosed with the flu in Albany County, according to the U.S. Department of Agriculture.

The town is still finding dead birds but not in the numbers found when the park was initially closed on Sept. 22. Crummey said on Wednesday, Sept. 28, the town found one dead bird.

The Crossings does remain open, Crummey said, and Harvest Fest is still on for Sunday, Oct. 2 from noon to 4 p.m. The precautions, though, will remain in place for the foreseeable future and the town stops finding dead birds for a period of time.

“I’m told it rapidly passes through flocks,” Crummey said. “Where it came from, I don’t know. I am told there is nothing else we can do to reverse the flu in these migrant flocks and I’m told it will run its course.”

For more information on Avian flu, visit the U.S. Center for Disease Control by clicking here.