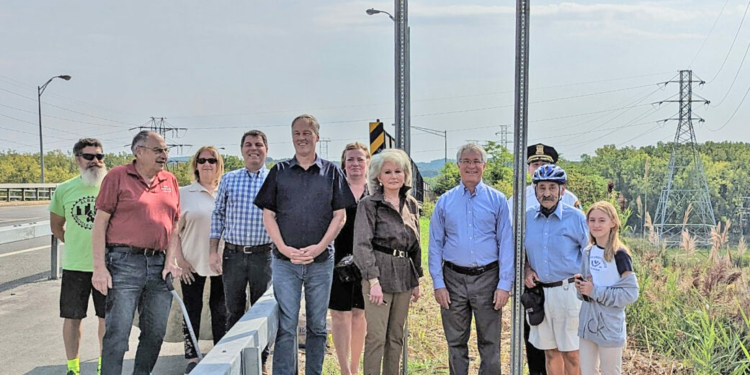 MENANDS — A ribbon cutting ceremony on Sept. 18 officially opened the Ronald H. Miller Bike Trail that connects Broadway and Route 32 to the Mohawk-Hudson Bike-Hike Trail, a 97-mile trail from the Corning Preserve to Herkimer County.

Spanning approximately one-half mile, the bike trail also connects the Menands portion of the Town of Colonie with the rest of the Empire State Trail network, which boasts over 750 miles of trails.

Assemblyman Phil Steck previously secured $500,000 in funding to pave the Mohawk-Hudson Bike-Hike Trail in Colonie and Niskayuna. The trail is named after Ronald H. Miller, a former economist at the state Department of Environmental Conservation, who served as a trustee on the Menands Village Board for two terms from April 7, 2003, until April 4, 2011.

“Ron Miller was deeply dedicated to serving the community that he loved,” said Steck. “One of his main goals as a village trustee was to develop a bikeway connector for the village to the Mohawk-Hudson Bike-Hike Trail, as Menands was the only area of the Capital Region on the Hudson River without a connection. It is only right that this trail is named for the person who invested the most time into its creation. Though he sadly passed away before the trail was completed, Ron’s legacy of hard work and dedication to the village of Menands lives on.”

Steck was joined at the ceremony by Menands Mayor Meg Grenier, village trustees, Miller’s wife and family members, and Ivan Vamos, a close friend and collaborator.

Voorheesville Public Library news: The Great Give Back