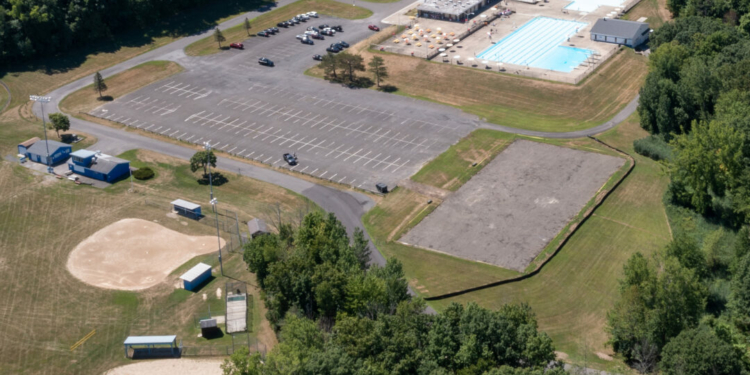 The new pickleball courts will be constructed where the tennis courts used to be at the Mohawk Park and Pool off Route 9. The Latham Lassies softball fields are to the left and the town pool complex is above. Jim Franco / Spotlight News

COLONIE — New pickleball courts are being built in town and it couldn’t come quick enough for fans of what has been called the fastest growing sport in the country.

“We are excited because it gives us an opportunity to get more people playing,” said Michael Hickey, who is on the Executive Committee of the Colonie Pickleball Club. “The lack of courts is the biggest challenge for us. There are so many people who like the sport, and so many people who will enjoy playing in the future, and the new courts in Colonie will go a long way to making that happen.”

The surface of the old tennis courts at the Mohawk Park and Pool off Route 9 were deteriorated to the point of not being usable, said Supervisor Peter Crummey, so within the last two weeks they were ripped up and the plan is to build six courts dedicated to pickleball with two courts striped in a way that will allow tennis as well as pickleball.

Also, two new courts and basketball courts at the Latham Kiwanis Park on Route 2 were blacktopped last week and should be completed before the snow flies. Construction of those courts were delayed when there was a dispute with a tenant of the premises and the parking arrangement if the courts were built.

The plan to build courts at the Mohawk Park that was talked about during the last administration. Last month, Waste Connections demolished the courts and cleared the debris at no cost the town. At its last meeting the Town Board voted to hire LaBella Associates for $29,500 to perform the “design, minimal inspection and record drawings for the project.”

“They were inoperable, even last summer when I was walking around out there, all the nets were pulled off because there were significant impediments in the surface itself and it really wasn’t safe or conducive for tennis any longer,” Crummey said. “They are gone now, and we have hired an engineer, Labella was the low bidder, and we will build new courts with the objective of getting more people into our parks.”

The park off Route 9 is home to the town’s two swimming pool, a splash pad, a dog park, miles of trails, the Latham Lassies softball organization, a football field, pavilions, playgrounds and a boat launch.

Earlier this summer, the town Conservation Advisory Council held a cleanup of the bike and hiking trails along the Mohawk River and there are plans to rebuild the boat launch at is current spot or find a new location if that option proves more feasible.

“This is not a passive park. The Crossings is considered a passive park but there are all sorts of activities that take place at the Mohawk Park,” Crummey said. “My long term plan is to coordinate the activities. It’s a beautiful spot, with a ton of room and it has plenty of parking so that park is a focus right now.”

For example, he said, right now there is a snack bar and restroom facilities at the town pool and a long range idea is to renovate that building and open it up for pickleballers, cross country skiers, boaters and anyone else using the park during all four seasons.

For the pickleball community, the new courts are a welcome addition to the Colonie park system.

“We know it has been a difficult process over the past couple years, because of issues like COVID or supply chain issues but we are felling more encouraged and optimistic this year and we are seeing work being done,” Hickey said.

Right now there are about 140 members of the Colonie Pickleball Club and with more places to play, he expects that number to surpass 200 in short order.

It is a sport that combines physical activity for older people and provides an avenue for social interaction.

“For a lot of our members it is their primary physical activity and for a lot of people, especially during COVID, the social interaction piece was a really important component of the sport,” Hickey said. “Our growth has been limited only by court availability.”

In May, 2021, there were just four courts in all of Colonie stripped exclusively for pickleball, at the Milton Pocket Park off Rapple Drive in the village. There are tennis courts with pickleball lines drawn at Locust Park and Cook Park but it’s not the same. Close, but not the same.

Last spring, a group of pickleballers came to a Town Board meeting begging for more courts so more can engage in what has been called the nation’s fastest growing sport. The project at Kiwanis Park was initially slated for eight pickleball courts but the parking issue forced the town to scale it back to two pickleball courts and two basketball courts.

The sport is a mix of tennis, badminton and ping pong. It is played by hitting a whiffle ball with a paddle over a net that bisects a 44-foot court. Seven-foot on either side of the net is the “no-volley” zone, making the playing area smaller so older, less athletic people can cover the court. Plus, a whiffle ball doesn’t go as fast as a tennis ball, regardless of how hard it is hit, but there is more athleticism required, and more of a cardio workout, than standing at a ping pong table.

“The organization represents a diverse and accomplished group of citizens in town. We enjoy an active recreational  outlet and strong social outlet that is not replicated in any sport,” Andi Schneiter, co-chair of the Colonie Pickleball Club Welcoming Committee told the board last May. “As accomplished, active and retired people, finding purpose, joy and a social connection is so critical to our physical health and mental well-being. The benefits to a person and to a community are enormous.”

Schneiter, citing statistics from the latest U.S. Census, said the town’s population grew by 2.3 percent from 2010 to 2020 but the number of people 55 and older grew by 28 percent with the ranks of those 65-74 years old growing by 57 percent.

According to the USA Pickleball Association, the game has been around since 1965, but has exploded in recent years. In 2020, there were 4.2 million players in the U.S., an increase of 21 percent from the year before. Of those, 2.2 million were casual players with the rest core players, those who play eight or more times a year at all different levels from beginner to intermediate to competitive. Of the core players, 60 percent are 55 or older.