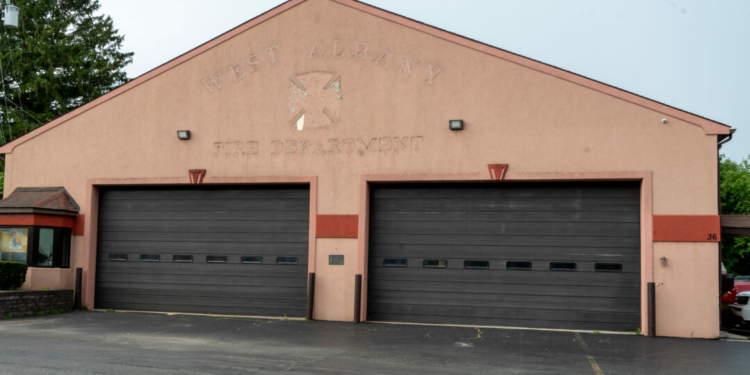 COLONIE — There hasn’t been a fire truck run out of the West Albany Fire Department Compnay No. 2 on Osborne Road for more than a decade. But, the doors have remained open as a community center/social hall/clubhouse.

In October, 2021, the town cited the building as being against code, said Lisa Proskin, an attorney representing the community center membership, said.

She said the operators have “filed the appropriate paperwork and are in the midst of seeking a variance to continue using the building as a social hall and gathering place as it has been since it was built.”

She appeared before the Zoning Board of Appeals at its Aug. 3 meeting hoping to get a variance to continue operating the social hall in a residential neighborhood about a block and a half from Central Avenue.

The matter was postponed until October while she and the ZBA gathered information.

Company No. 2 has a somewhat convoluted history.

In 2011, the towns fire commissioners voted to end firematic services out of the station and instead run all fire apparatus out of the West Albany Fire Department Company No. 1, located about a mile away on Sand Creek Road. Vehicles for hazardous materials and other apparatus were stored at Company No. 2 but in November, 2012, the town fire commissioner voted to close the station and stop paying the district $67,500 a year in rent for the building, essentially forcing its doors closed.

While the “West Albany Fire Department” lettering and symbol are removed from the outside of the building above the overhead doors their outlines are still visible. On a Friday afternoon, there were at least a dozen vehicle in the parking lot.

The building is under the auspices of a non-profit and how the requested variance will work, for how long and what to do if the current ownership dissolves were discussed at the ZBA.

One option presented to the ZBA by Proskin is to have the variance last 50 years and if at that time they want to continue they would have to come back before the ZBA. Another would be to allow a “continuous use,” and if it not used as it currently is for nine months it reverts to the original zoning, which is residential. Or, to limit the buildings use to another non-profit.

“The variance would be limited to a non-profit organization, then all those things we worry about — a nightclub, a strip club — I don’t believe any of those are not for profits,” she said.

The bylaws, though, state that if the West Albany Fire Company No. 2 dissolves the ownership of 36 Osborne Road would transfer to the town, she said. It is currently operated by an elected Board of Directors with officers.  The current president is Martha Bleichert and chairman of the board is Michael Schaap.

Supervisor Peter Crummey said the first he heard about the issue was when contacted by a reporter and that the town has no use for the building.

Peter Crouse, chair of the ZBA, said what to do with the building should the non-profit dissolve must be worked into the variance.

“The issue of what you do with the money after the sale is what the court is going to concern itself with. You can sell the building and not dissolve,” he said. “The idea of selling it to a non-profit, there are a lot of potentially damaging non-profit uses for that neighborhood. Just because they are non-profits doesn’t mean it will fit in the neighborhood. It may significantly change that neighborhood.”

Any plans for the building and other assets, should the non-profit dissolve, would have to be reviewed by the state Attorney General’s Office, he said.

The requested variance would allow the group to continue “as is,” Proskin said.

“If it is not granted, the non-profit will continue to exist and determine what to do with the assets as well as the meeting place,” she added.