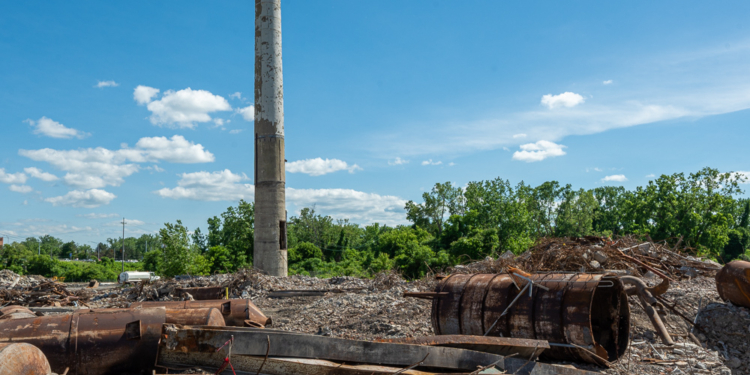 The 200-foot smokestack is the last thing standing at Tobin's. (Jim Franco/Spotlight News)

COLONIE — The 200-foot smokestack is all that is left of the former Tobin’s First Prize on Exchange Street.

For months, Jackson Demolition has been meticulously knocking down the massive, 500,000-square-foot building and grinding up the tons of concrete on site. Crews have also been digging up tons more concrete that acted as footings that supported the building for decades and likewise grinding it up to use when rebuilding the site begins.

It is not clear when the smokestack will be felled, or how Jackson will go about felling it. Gravity, though, will certainly play in the company’s favor whether it opts to use some type of explosive or more traditional methods of demolition, like just pushing it over.

Bill Hoblock, president of Richbell Capital, the Saratoga-based company that owns the site and successfully secured funding to level one of the Capital District’s longest-standing — and largest — eyesores, said crews are still working on other aspects of demolition and no date has been set to bring down the smokestack.

From 1924 to 1981 Tobin’s operated as a thriving meat packing plant and in its heyday employed some 1,600 people. The decades of industrial activity led the state to classify the 32-acre site as a brownfield and as such will need to be cleaned up in accordance to standards dictated by the state Department of Environmental Conservation.

According to the DEC, activities at the site included manufacturing of fertilizers, glue, and animal hides, and then slaughterhouse and meat packing operations. The meat packing operations included offices, a laboratory, a boiler room, coolers, freezers, a machine shop, a vehicle maintenance shop, two incinerators and a hog pen.

The incinerators operated until the 1960s, reportedly burning paper and wood waste, with onsite disposal of the associated ash and coal. Since the mid-1980s, the site has been used by various commercial and industrial companies, including storage, painting, laminating, vehicle storage, office space, cement manufacturing, vehicle repair, health care facilities and an art studio.

Through July 8, the DEC is accepting public comment for a Draft Interim Remedial Measure, which “is a cleanup activity that may be performed when a source of contamination or exposure pathway can be effectively addressed without extensive investigation or evaluation.”

The DEC will consider public comment and where necessary modify the IRM. The DEC and the state Department of Health will then re-evaluate the site once the work is complete before re-development can begin.

The land straddles the City of Albany and Town of Colonie line and a joint Planning Board is seated to address the re-development.

The board has not yet met, and there are no formal plans for re-development but Hoblock said previously it will likely begin with the residential component with a commercial component to follow.

The original plan was to include hospitality and entertainment facets, but COVID-19 hit those two industries particularly hard so what the final product will look like is very much up in the air.

This story will be updated for our print edition