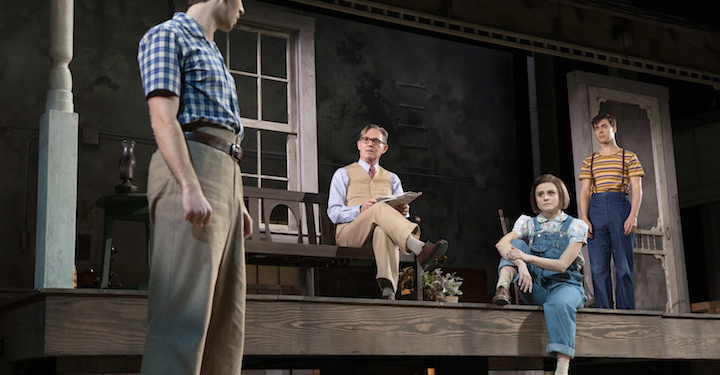 SCHENECTADY — Before the cast for Harper Lee’s “To Kill a Mockingbird” takes the Proctors stage for Opening Night, they have a task to spread the word: The racism depicted in this Depression Era storyline is still here today.

Set in Alabama in 1934, Lee’s enduring story of racial injustice and childhood innocence centers on one of the most venerated characters in American literature, small-town lawyer Atticus Finch. The cast of characters includes Atticus’s daughter Scout, her brother Jem, their housekeeper and caretaker, Calpurnia, their visiting friend Dill, and a mysterious neighbor, the reclusive Arthur “Boo” Radley.

Academy Award-winner Aaron Sorkin’s adaptation of the novel still tells the story of racial injustice through Scout’s eyes, but he enhances it by sharing more of Tom Robinson’s character and his voice.

The coming-of-age story takes a turn when the attorney decides to represent Robinson, a young Black man who is accused of raping a White woman. Despite the mounting evidence pointing away from Robinson, Finch and his family sees their hometown of Maycomb, Alabama turn against them.

Outside the play, Atticus’ flashpoint is somewhat reminiscent of larger events that revealed racism when society thought it was gone. Yaegel T. Welch, who plays Robinson, points to the Rodney King incident of the 1990s, the Civil Rights movement of the 1960s and the riots that followed both.

“All of a sudden, it ignites this motivation to fight against these causes,” he said. “I think it’s a wash, rinse, repeat sort of thing that we’re having in society, because it’s not necessarily new. I think with camera phones, they have to be more careful with the racism.”

Welch conjured images of Black protestors hosed down in front of television cameras, with police dogs snapping at their limbs. It showed how public policy allows room for racial injustice to take place. How Stand Your Ground justified the killing of 17-year-old Trayvon Martin in Florida. How police officers in Kentucky shot and killed Breonna Taylor after they charged into her apartment in a botched drug-dealing investigation. There were no convictions.

Then there was George Floyd, who died under the knee of Minneapolis Police Officer Derek Chauvin. A video capturing the event ultimately led to Chauvin’s murder conviction. He was sentenced to 22.5 years in prison.

“It lets me know that ‘To Kill a Mockingbird’ isn’t in a time capsule. It’s just a different costume,” Welch said.

The success of the play is often explained by how Sorkin expands on Robinson’s character. It lends a voice to a man, Melanie Moore said, who’s in “two chapters” in the original book.

Moore plays Scout in the tour production. She’s watched the Broadway play three times. Growing up in the suburbs of Atlanta, Georgia, Moore said she witnessed the covert racism that she sees in Atticus Finch. Emmy Award-winner Richard Thomas portrays the patriarch. He’s a flawed man who contends with his own prejudices, she said. Racism is ingrained within the culture, of which she wasn’t aware until she started taking an earnest look at life in 2020. She drops mention of the popular Southern phrase “bless your heart;” implying something more malicious than what appears on the surface.

“I hope that people come to see our show and feel motivated to get involved in their communities and call their senators,” she said, “and want to meet people who are not like them — to understand why this is still happening.”

Welch said he feels rewarded for his involvement in such a “transformative” production, and that he sees it healing society by addressing issues “we have been uncomfortable with.” Moore added that she hopes audience members will be inspired to create change in their own lives, their neighbors, and “in the lives of people who maybe they don’t know.”

“I hope that our show can hold up a mirror and say, ‘Who do you play in this town? Are you Atticus?’” she said. “ I hope [the show] will allow people to take a look into themselves and what role they play in their own communities right now. So that when this show is revived 50 years from now… I hope that it looks very different.”

Harper Lee’s “To Kill a Mockingbird” opens at Proctors on Tuesday, June 14 and runs through to Sunday, June 19. Tickets are available from the Proctors box office by visiting Proctors.org, or by calling 518-346-6204. For more information, visit proctors.org.

Retired columnist shares perspective of Saratoga County through his work