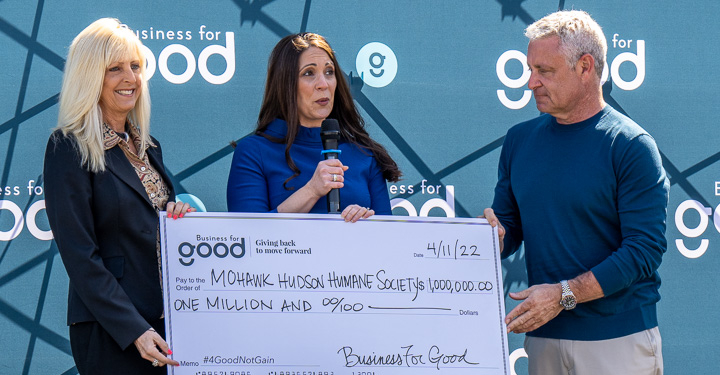 MENANDS — Business for Good, a foundation created by Ed and Lisa Mitzen, lived up to its name with a $1 million gift to the Mohawk Hudson Humane Society, the largest in its storied, 135-year history.

“A few years ago Ed and I had an opportunity to tour the Mohawk Hudson Humane Society and after meeting Ashley and her team, it did not take long to realize what an incredibly special place this is,” Lisa Mitzen said during a check presentation and ribbon cutting on Monday, April 11. “The care they provide goes well beyond the rescue. The team here identifies each animals’ needs and they work hard to find the animal their forever home. During the animal’s stay here they receive daily enrichment and there is free support services available for the new pet owners after adoption. Their well-thought out programming, combined with their incredible compassion is so heartwarming, Ed and I, along with Business for Good, feel blessed to have this opportunity to support all of their outstanding work.”

The new facility, which opened in 2017, will now be named the “Lisa Mitzen Animal Care Center.” The 32,000-square-foot building located off Broadway, is used, of course, to house animals waiting for adoption but also to offer veterinary care, training for law enforcement and animal owners and as a shelter for animals displaced by tragedies and abused and stray animals picked up by municipalities.

Like everything else, MHHS had to shift gears during the two-year pandemic while still maintaining its primary purpose of caring for and finding homes for more than 2,100 animals a year — all while having no face-to-face contact with potential pet owners.

Ashley Jeffrey Bouck became CEO in 2020, just as the pandemic was taking hold on the world, and was charged with figuring out how to keep providing the services, which were in even more demand given the financial hardship felt by so many, and keeping the staff and volunteers safe and healthy.

MHHS relies heavily on fundraising and donations for its survival but that was difficult since large gatherings — or any gatherings — were frowned upon. She asked Lisa and Ed Mitzen to co-chair the shelter’s signature GALA in 2021 and thanks to their generosity of time, resources and connections, it was the most financially successful GALA ever, even though it was done virtually.

“That is when we really got to know Lisa and experience her lifelong passion for helping animals,” Bouck said. “Perhaps the most important thing that underlies our connection is our shared belief that pets are family. They are irreplaceable for their unconditional love, their support and the joy they bring. No one should have to give up their animals because they can’t afford to feed them or provide basic veterinary care and every animal should be given a second, third, or fourth chance to find the love, respect and care they deserve.”

Lisa Mitzen said she grew up in Washington County and is often asked if she was raised on a farm. She was not, although the family did have a pet dog, but she had many friends who had dairy farms and she would spend hours there running with the animals, riding horses and even doing chores.

In 2017, Ed Mitzen’s advertising company, Fingerpaint, was doing well, she said, so he said to her: “Now it’s your turn. Give up your career in mortgages and pursue your passion.” So she started the Handsome Cock farm.

“I don’t think he realized at the time my passion meant starting a farm and my little hobby farm quickly turned into much more which lead me to a deeper commitment to animal care, rights and activism,” she said on Monday. “We sell farm fresh eggs and some swag at the Saratoga farmers market and we donate all of our proceeds to charity, mostly animal related.

“I’d like to take a moment to thank Ed, for recognizing that when it comes to the decision to welcome more animals into our farm he has absolutely no say. I do have to add, he is always a good sport, and goes with the flow, even when he returned from a business trip one time to find two baby goats in our master bathroom tub. True story.”

Business for Good has donated more than $5.5 million to more than 2,000 organizations since its start in 2020. Ed Mitzen has started three business, his current, Fingerpaint, based in Saratoga, generated $150 million in revenue.

Ed Mitzen has refereed to Business for Good as “venture philanthropy.” Last year it purchased the Saratoga landmark Haittie’s Restaurant and Chicken Shack, kept the owners on the payroll, gave all employees a raise and health care, and now all proceeds go to charity. It also purchased Lombardo’s in Albany and has plans to follow the same model, according to a story in the Times Union of Albany.

The foundation, a 501c3 nonprofit, is run by Ed and Lisa and their three children.

“We had a simple goal when we started: to help as many people as we could. Do as much good as we could do,” according to the Business for Good mission statement. “We knew we wanted to be active, hands-on. We wanted to do more than cut checks. We wanted to build something lasting by investing in people for the long term, and in every way. To do this we had to rethink the relationship between business and philanthropy. We’ve seen the power of business and entrepreneurship to embolden people, to strengthen and shape communities. And our goal is to harness it—for good. For everyone.”

A number of elected officials spoke at Monday’s event including Albany County District Attorney David Soares, Colonie Supervisor Peter Crummey, Sen. Jim Tedesco, Assemblyman John McDonald and U.S. Rep Paul Tonko. All praised the work of the Mitzens and of MHHS with more than one sharing stories about the pets they adopted from the shelter.