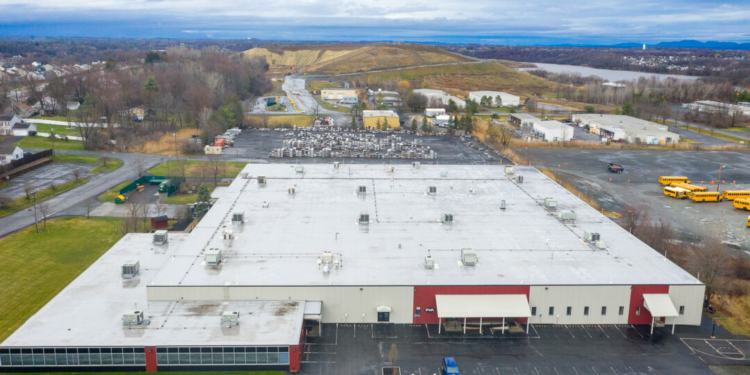 The building on Mustang Drive that will be home to a new Amazon facility. The town landfill and the Mohawk River are in the background. Jim Franco / Spotlight News

COLONIE — The Planning Board, by unanimous vote, gave Amazon the final OK to build a last mile delivery station at a former manufacturing plant off Route 9.

The plan would renovate the now vacant Precision Valve Automation building on Mustang Drive to accommodate the 24-7 operation that is designed to be busiest outside the peak a.m. and p.m. travel times.

A typical day, as described by Eric Daniel, a project manager at Amazon, would begin at around 10 a.m. when the first wave of van drivers arrive at the site to pick up their loads and last for about an hour. In all, there would be between 80 and 100 delivery routes leaving the site each day.

While the vans are on the road, Amazon Flex drivers – those who drive their own vehicles — would pick up packages and deliver them. The flex program, Daniel said, is an opportunity “for parents and students to make some extra income in their spare time.

Comparing the program, which is controlled through Amazon on a smartphone, to the concept of Uber and Lyft, he said “instead of passengers, they will arrive at the facility and pick up packages.”

The flex drivers will continue home after their route and the van drivers will return to the site between 7 and 8 p.m. to pick up their own vehicles.

The site “goes dark” until between 10 and 15 tractor trailer trucks arrive at staggered times during the night. An overnight crew, or associates, will then unload the merchandise and load them into the some 120 vans for the daily routes that begin at 10 a.m.

No neighbors or members of the public commented on the project.

The plan is to start renovations this spring and have the site up and ready by the holiday season.

Amazon will pay the town $80,000 to widen Fonda Road between Mustang and Green Mountain drives from 22 feet to 26 feet to better accommodate truck and other traffic.

It will also incorporate a new stormwater drainage system at the site, which currently does not have the capacity to handle runoff, and plant 60 trees and 127 shrubs.

The Planning Board imposed two conditions on the final approval: that Amazon not regularly use the loading docks on west side of the building and not use Falcon Drive except when there are extenuating circumstances.

Amazon has hundreds of similar, last-mile facilities across the country. It had proposed to build off Central Avenue in the Village of Colonie but that plan fell through. The nearest like facility is in Amsterdam. A large distribution center was recently constructed in Schodack but that takes in merchandise and delivers it in bulk to places like what will be built on Mustang Drive.

Precision Valve & Automation had occupied the building for years and still owns it, according to the Business Review. In 2020, the publicly traded company moved four miles north to Corporate Drive in Halfmoon, the former home of an indoor soccer facility.