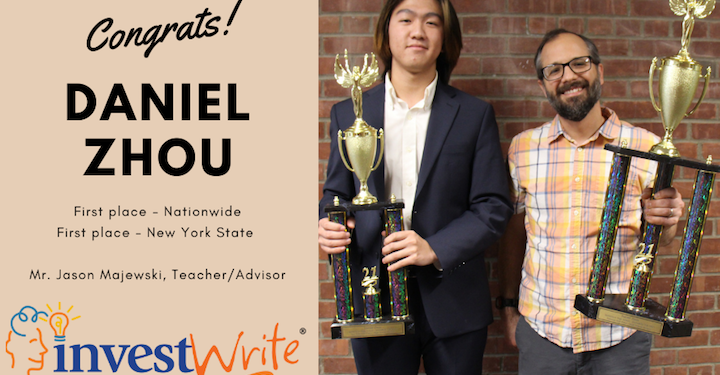 That’s the way you could sum up BC student Daniel Zhou’s experience with this year’s Stock Market Game and its culminating activity, the InvestWrite essay contest. While the Stock Market Game gives students the opportunity to build a virtual portfolio over a three-month period, the InvestWrite essay challenges the same students to address real-world financial issues and situations by writing about their long-term investment strategies.

And while Zhou’s virtual short-term investments tanked over those three months, his essay soared.

The most recent InvestWrite competition challenged students like Zhou to describe an investment portfolio of stocks, bonds and mutual funds in sectors destined to transform the future, from technology to medicine to transportation.

By choosing space exploration as the final frontier for young investors, Zhou described his investment plan as one featuring companies and investments that in his words will “back the innovation that catalyzes and supports the efforts to carry humanity into a new era.” With captivating writing and ideas, the BC senior’s essay wowed a panel of experts and has been judged to be the best in the country, out of nearly 2, 800 high school entries.

The InvestWrite essay contest and the Stock Market Game are financial education programs sponsored by the SIFMA Foundation. SIFMA is the leading trade association for broker-dealers, investment banks and asset managers operating in the U.S. and global capital markets. For more than a decade, the programs have been part of the BC experience for students of Jason Majewski, who teaches economics at the high school.

Zhou and Majewski were both recognized Thursday, Mar. 24 with the surprise announcement that Zhou was both the New York State winner and the national InvestWrite winner. That announcement was made by SIFMA Foundation representatives, including the foundation’s president Melanie Mortimer.

“SIFMA Foundation congratulates Daniel and his teacher on this remarkable achievement,” said Melanie Mortimer, President of the SIFMA Foundation, who joined the celebration via Zoom. “They are a powerful example of the impact our programs can have in classrooms nationwide. We are preparing youth to navigate the capital markets and financial decision-making, equipping them early on for lifelong success.”

Zhou explained to Mortimer that his interest in space exploration came about through his role on the school’s speech and debate team.

“I do public forum debate and one of the topics was about the Space Force,” said Zhou, who runs a Speech and Debate summer camp. “My research into that was how I first came to understand the potential of this industry and some of the companies that were involved with space exploration as a whole.”

Zhou used some of that research to identify companies and investment funds that he thinks will be at the forefront of space exploration or space-based defense systems. His essay, which can be read below, and the 2,666 other high school entries were judged by a network of 2,000 investment professionals who work at institutions such as Fidelity Investments, Deloitte, Morgan Stanley and the European Central Bank.

At the announcement on Thursday, Zhou was presented with several prizes, including two large trophies, a $750 Amex gift card, a banner and more. For his role, Mr. Majewski also received a $750 prize. An additional $100 is being made available to fund a classroom celebration.

“There is quite the legacy at Bethlehem Central High School,” said Liz Reidel, national director of the SIFMA Foundation, who delivered the trophies to Zhou in person. “You are at the top of the heap.”

The goal of the InvestWrite competition is to ensure young people are exposed to the essentials of personal finance early in life and to encourage students to consider careers in financial services.

Zhou, who is planning to attend Dartmouth in the fall, admits he is considering a career path in business but also has aspirations that hit closer to home.

“I’m thinking I want to go into finance but ultimately I’d like to be a high school teacher,” said Zhou.

Read Zhou’s winning essay, “Capitalizing on the Cosmos” on the district website at https://www.bethlehemschools.org/investment-strategy-earns-national-win-for-bc-senior/.