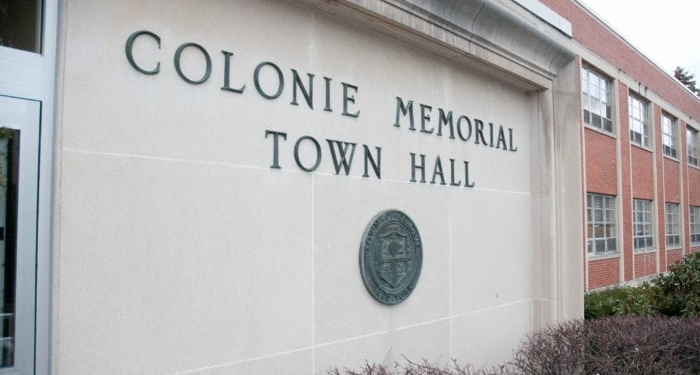 COLONIE — The town has a new supervisor and, as expected, there are some changes around Town Hall.

At the annual organizational meeting on Thursday, Jan. 13., Town Board member Rick Field was named deputy supervisor and will preside over meetings in the absence of the supervisor. The position was held by Linda Murphy who last year opted to not run for another term. It comes with a $457 stipend in addition to the $22,347 Town Board salary.

“I had the great honor of serving under your dad’s administration almost 41 years ago and I hope to learn half of what he represented for all of us and it is a pleasure to have you continue to serve on behalf of the Town of Colonie,” said Supervisor Peter Crummey, who was sworn in on Jan. 1 as the first Republican to hold the office in 14 years.

“Proud to do so,” Field said after abstaining from the vote electing him to the position.

The Town Board unanimously appointed Judge Andrew Sommers to the position of court administrator. Sommers was first appointed to the bench in 2005 and elected to a full four-year term a year later and every four years since. The position carries a $12,000 stipend in addition to the $68,000 salary as a town judge.

“Under the Mahan administration the Town Board designated someone to lead the court system and I was fortunate enough to be the first one in 2009,” Crummey said. “Judge Sommers has the seniority in the courthouse and has served with distinction and was recently re-elected to another term so we are thrilled to have him as our court administrator.”

Crummey gave up the robes after 21 years on the bench to run for supervisor. He defeated Democrat Kelly Mateja in November, 2021.

Earlier this month, the Town Board appointed Guy Roemer as town attorney and Matthew McGarry was appointed commissioner of the Department of Public Works.

In other actions the Town Board appointed:

• Peter Crouse as chair of the Zoning Board of Appeals, replacing James Campbell.

• Pamela Daniels to the Board of Assessment and Review.

• The Spotlight as the town’s official newspaper.

• Woods, Roemer and Futia to the Communications Review Committee.

• McGarry as chair of the Facilities Planning Committee.

• Chair of the Planning and Economic Development Department Sean Maguire as chair of the Climate Smart Communities Task Force.

• Crummey, Futia, Roemer and Town Board member Melissa Jeffers as members of the Freedom of Information Committee.

• Sugrue as chair of the Hazardous Materials Response Committee.

• Lt. Robert Donnelly as chair of the Highway Safety Committee.

• John Kearney to another term as chair of the Industrial Development Agency.

• Kimberly Fanniff to a five-year term on the Library Board of Trustees.

• Crummey, Town Board member Jeff Madden and Tom Breslin to the Parks and Recreation Rules Committee.