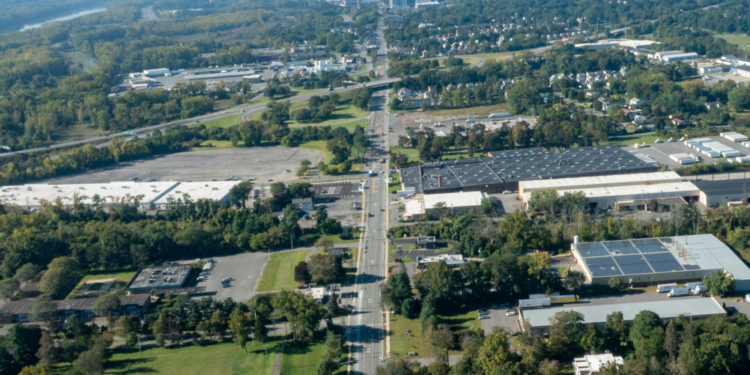 Broadway in Menands from near the Watervliet line looking south to Albany. (Jim Franco / SpotlightNews.com

MENANDS – There must be something in the water in the Capital Region’s Hudson Valley area with double digit population growth in multiple communities either bordering or near the Hudson River.

But the largest increase in population in Albany County in those 10 years?

The village of Menands saw a population increase of 14 percent, according to U.S. Census data.

The three-square-mile municipality located in the Town of Colonie and just north of the City of Albany had a population of about 3,990 in 2010 and that increased to about 4,550 in 2020.

The main reason for this, observed Mayor Megan Grenier, are the two housing developments that have been completed in the last handful of years ­— the former Albany International site in Menands is now the Albany Lofts at One Broadway and has 145 loft-style apartments, with the apartments located in Menands and the complex’s parking lot in Albany. Then there’s the Dutch Village Apartments which expanded with 48 apartments in four new buildings. The project at Albany International was completed in 2016 and the project at Dutch Village was finished in the last year or two, said Grenier.

“Additionally, many homes have become available with people downsizing, moving to assisted living or unfortunately passing away, which opened up homes for families that had been occupied by only one or two people. On my street alone, in one year, we saw an increase of nine kids move to the block. It’s great to see,” she said.

The village, which was incorporated in 1924 and named for prominent horticulturist Louis Menand, also approved their first comprehensive plan in 2020, with a focus on the Broadway corridor to support the creation of more retail stores and restaurants and make the area more pedestrian and bicycle-friendly.

“With the adoption of the Comprehensive Plan and the current land use project for rezoning, we are hopeful for continued economic growth in the village,” said Grenier, noting that the plan also puts the village in a better position to gain access to funding parts of this vision.

Aside from housing developments, there have been other developments for businesses in Menands. Simmons Machine Tool recently announced they purchased the building next door to expand their manufacturing space. Grenier noted she is grateful that Simmons decided to stay in Menands instead of moving elsewhere to expand.

The Riverview Center at 150 Broadway, the former Montgomery Ward building, continues to renovate the space of the large, iconic building that houses state offices and private business.

“We have met with developers who have letters of intent for other properties, but I have learned over the years to not get excited until the shovel is in the ground,” added Grenier, who served for six years on the Village Board as a Trustee and was elected mayor in 2011. She is currently in her third term.

“Menands has a lot to offer,” said Grenier, who grew up in the village, lived elsewhere for a period of time and moved back in 1992 to raise her family in the house next door to where she grew up.

“We are a very community-oriented village, offering senior, youth and family events throughout the year. We have a great school district, with K – 8, and then several options for high school outside of the Village. We are centrally located in the Capital District and minutes from every major highway. We offer services that other communities pay extra for, such as trash and recycling pick-up. We have our own public works, police and fire departments. And recently received an A+ in the most recent Niche Report and rated one of the best places to live in NYS.”

“I’m excited, knowing from an inside point of view and talking to developers about Menands, for what is yet to come,” she said.