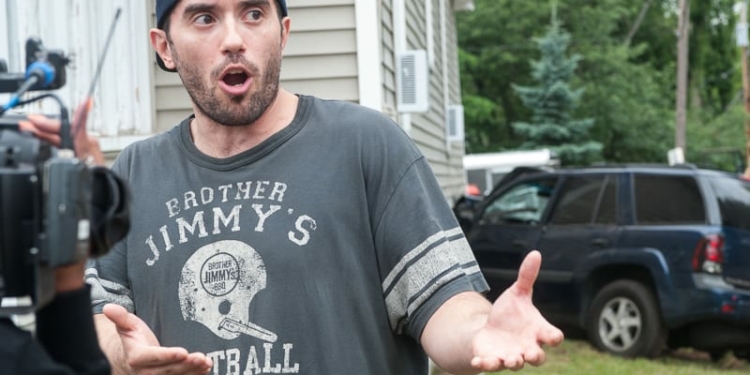 Nicholas Congemi explains to the media what transpired while he was inside the home at the intersection of Breeman Street and Central Avenue on June 27, 2018 (Jim Franco/Spotlight News)

ALBANY — A 54-year-old Schenectady man was sentenced to up to seven years in prison for a wild, 2018 scene on Central Avenue that included him hitting three cars before smashing into a house on Breeman Street.

A jury found Donald Bender guilty of reckless endangerment during an earlier trial and on Tuesday, July 27, Albany County Judge Andra Ackerman sentenced him to two and a third to seven years.

On June 27, 2018, Bender, inexplicitly, was speeding down Central Avenue when he rear-ended a vehicle being towed by a flatbed truck.

According to District Attorney David Soares, eye witnesses testified at trial that they saw Bender jerk his vehicle, “rev” his engine, and dislodge his vehicle before accelerating down the street swerving in traffic.

He nearly hit other vehicles, including a bus, before he rear-ended a mini-van while “trying to move it out of the way.”

About 50 feet further down the road, he rear-ended an Altima, causing it to roll over onto a fire hydrant in front of the Days Inn motel.

He eventually lost control of his vehicle, cut across a lawn and “crashed into a house at a speed of 57 mph,” according to Soares

At the scene, bender was combative and struck at least two witnesses and injured an officer’s arm. The officer was treated at a hospital but he did not face charges related to the injuries.

There were no serious injuries to witnesses or the other drivers involved in accidents.

At the time, police were at a loss as to why Bender was driving like he was.

Nicholas Congemi and his 11-year-old daughter had moved into the home at the intersection of Breeman Street and Central Avenue three months prior to the accident. Both were inside when Bender crashed into the house.

Bender was initially charged with the misdemeanor of DWAI by drugs. The felony of reckless endangerment was added after.