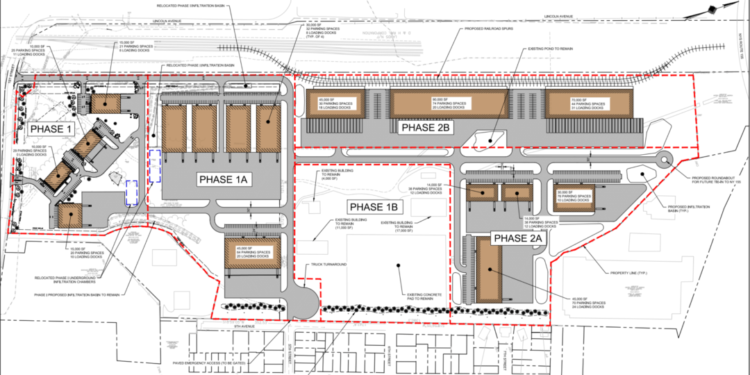 COLONIE — The Planning Board moved forward the early phases of a master plan that could include more than 550,000-square-foot of industrial development on 28 acres that used to house a railyard between Lincoln Avenue and Ninth Street.

Phase 1 was introduced in January, 2020, and is under construction. The board, on Tuesday, July 13, was asked to approve a modification to that phase, which had includes two 25,000-square-foot warehouses and a storage yard. Instead of the storage yard, Lincoln Avenue Development, LLC, a subsidiary of Luizzi Brothers, wants to build four warehouse/office buildings, totaling 120,000-square foot, and one 45,000-square-foot building. It would be known as Phase 1A of the master four-part master plan.

Just Phase 1A was before the board, but the entire master plan dominated the discussion to set the groundwork for future development. For example, the location of the road could impact a future building’s set back and if the town opts to not take ownership, it will require an Open Development Area variance, because it would not have access to a public road.

Other topics of discussion included buffering along the residential homes on Ninth Avenue. Joe Grasso, the Town Designated Engineer on the project, said he would like to see a 30-foot berm.

Also, the traffic study may have to be modified since the latest iteration would include an additional 165,000-square-foot of warehouse space.

According to the master plan, presented by McFarland Johnson on behalf of Luizzi:

D&H Railroad Company used the land on the border with Watervliet for the storage of materials but it has sat vacant for years.

The developer introduced a sketch plan of Phase 1A to The Planning Board in December, 2020. At the last meeting it granted concept acceptance and that portion of the plan will need to come back before the board at least once more before construction can start.

The future building phases will also have to come before the Planning Board for the three steps of the planning process before construction can begin on each phase.