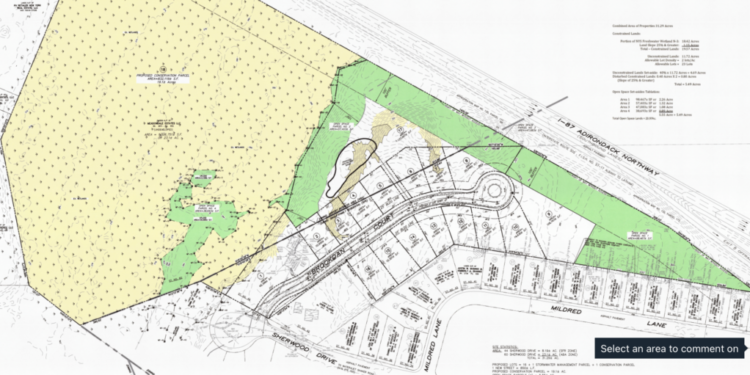 COLONIE — The Planning Board gave a new iteration of a housing development, located off of Sherwood Drive it sent back to the drawing board in February, the go ahead at its last meeting.

“We hope the changes we made to this plan would be acceptable to the board for concept approval,” said Lynn Sipperly, who presented the plan on behalf of the developer,

The initial proposed buffer between the development and the Northway was doubled, from 50 to 100 feet, and the number of lots in the conservation subdivision were reduced from 18 to 16 — with one existing home, one lot for storm water management and 14 new homes.

If it were proposed as a traditional subdivision under Single Family Residential zoning regulations, there could be as many as 23 lots with a minimum of 18,000 square feet, including the one that has an existing home and one for storm water management.

A conservation subdivision allows for smaller lots, but does require more land remain open space. Under this plan, 24-plus acres of the total 31-plus acres, or 78 percent, would be remain untouched. There is a large chunk of wetlands that may or may not be deeded to the town. The town already owns the land directly to the west, Sipperly said.

“Based on our view the Conservation Subdivision results in significantly less environmental impacts and provides better protection for adjoining neighbors,” said the Town Designated Engineer Joe Grasso. “We are supportive of the plan and commend the developer for being responsive of comments expressed during the first sketch plan review.”

Planning Board Chairman Peter Stuto questioned the size of the homes on the proposed 10,000-square-foot lots and whether the mass would be too big for the lots. Sipperly said the proposed homes would be a carriage-home style homes of between 1,800 and 2,000 square feet maximum.

The plan would combine two parcels of land, 44 and 60 Sherwood Drive, with more than half located in the Airport Business Area and the rest zoned Single Family Residential. Six of the proposed lots would encroach on the ABA zone and would need a use variance before construction can start.

The Planning Board voted to accept the concept, but the project would also have to come back before the board for final site plan approval before construction can begin.

Caring is in The Spinney Group’s DNA — The next generation is guiding this family owned business into the maturity, growth