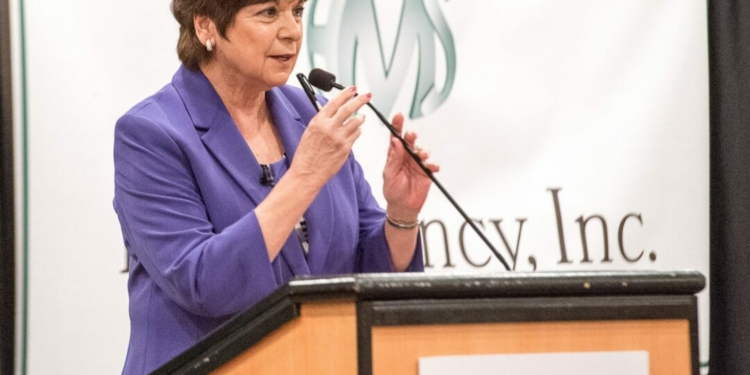 COLONIE — Rather than endorse a member of her own party as her successor, Supervisor Paula Mahan said she is “sitting back and observing what is going on in the race.”

“I want to see how things go,” she said recently. “This is a different election all the way around. It is different for me because I am the one who is leaving, and I want to see the best candidate for the Town of Colonie. Someone who will be here for everyone.”

Mahan was a Republican prior to being elected as a Democrat in 2007 and wresting control of Town Hall for that party from the GOP for the first time in decades. Often, at the local level, political party ideology and loyalty takes a back seat to individual principles and personal relationships.

She fell short of endorsing the Republican, former judge Peter Crummey, who gave up the robes to run for the town’s top spot, but did have more to say about his candidacy than his opponent, Democrat Kelly Mateja.

Mahan said “Kelly seems like a nice person” but “the judge has many years of experience in the town and I’ve always known him to treat everyone with the same amount of respect and from what I have seen he has been working very hard and we will have to wait until the election is over to see how things shake out.”

“I want to see someone who will treat everyone with the same amount of respect. That is what I have always done,” the former teacher in the North Colonie School District added. “I have treated everyone the same regardless of party affiliation and tried to keep politics out of things so I’m hoping the winner of this election for supervisor and the board seats will follow that path.”

Mahan, too, over the past 13.5-plus years, has worked much more closely with the former judge who headed up the town Judicial Department, than Mateja, who briefly worked in the Planning Department during Mahan’s tenure.

Democrats do outnumber Republicans in Colonie, a dynamic seen in many Albany suburbs, but the town is decidedly purple — an even mix of red and blue ideologies.

Crummey said, over the last four decades-plus, he has gotten support from enrolled Democrats each time he ran for office and that for the last 20 years, the Democrats didn’t even run a candidate for judge against him.

“We have enjoyed cross over support from all sectors over the years,” he said. “Look at the vote tallies we enjoyed. It’s my hometown and people know me. As a result, party line is not important to people who really care about Town Hall.”

He said when he was getting out of law school, he wanted to work in Town Hall and possibly run for office. For years, the easiest way to accomplish those objectives in Colonie was to enroll in the Republican Party. Since being elected, he has worked with Democrats and Republicans in Town Hall to make sure one of the busiest municipal courts in the state ran as smooth as possible.

“Reasonable minds can differ, but civility is the cornerstone to making progress,” he said. “Drawing bright lines between ‘them and us’ is not healthy and I don’t think we should have that at Town Hall. I want a Town Hall that is inclusive and not divisive.”

That philosophy may sound nice, but the Republicans did throw some of their best candidates against Mahan — including Christine Benedict, Frank Mauriello, Mike Hoblock and Todd Drake — in an effort to win back what was for decades a Republican stronghold. They have all been hard fought and have all been close. Two years ago, George Scaringe lost to Mahan by less than 200 votes.

Mateja is making her first run at public office and took the non-endorsement in stride.

“In politics, especially Colonie politics, one should never be surprised,” she said. “I focus only on what I can control. Time is too short and the challenges facing our community are too urgent to concern myself with anything else.”

How much any endorsement helps or hurts a campaign is an open question, and one often debated by talking heads, political operatives and junkies and candidates.

But, safe to say, it can’t hurt. Especially when it comes from a popular, personable incumbent like Mahan who will leave behind a legacy of fiscal responsibility, a revamped planning process and not a hint of scandal.

Something is killing off nesting songbirds across the region, and it has experts on alert here in New York