A new home for the Karner blues created on Curry Road 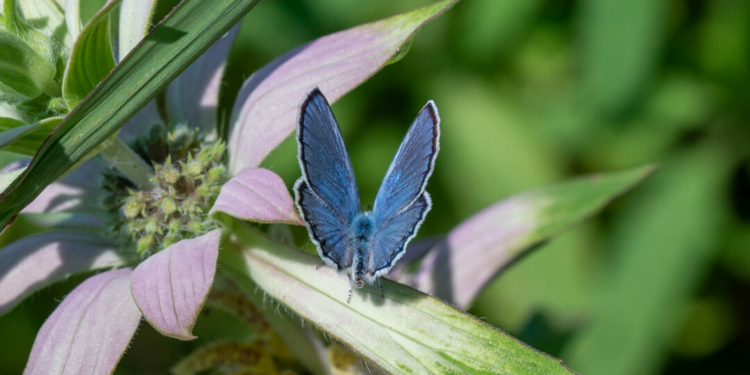 COLONIE — The Karner blue butterfly comeback remains one of the wildest success stories of our time and if all goes well, colonies of them will have a new 70-acre home on Curry Road.

The land, near the border with Schenectady, was covered in a canopy forest of non-native trees, said Neil Gifford, the Albany Pine Bush Preserve Commission conservation director, when it was purchased eight years ago for $235,000 with a federal U.S. Fish and Wildlife Service grant funneled through the state Department of Environmental Conservation.

The APBP spent three years clearing the trees and removing the stumps of non-native vegetation while leaving the native trees in place. It then planted wild lupine at three pounds per acre to return the habitat to a former configuration and one liked by the Karner. The quarter-sized Karner butterfly feeds on wild lupine.

“This is a clear example of the exceptional efforts to manage this globally-rare habitat by the commission’s conservation science and stewardship team working in close partnership with our state and federal partners,” said Albany Pine Bush Preserve Commission Executive Director Christopher Hawver.

Gifford said the land in Colonie is too isolated for the Karner butterflies living at the preserve to migrate to on their own so they had to deliver them to the new home with the hopes they start a colony on the newly prepared land.

“It’s worked well,” Gifford said of returning the land to a former status for the butterflies. “It has been a lot of teamwork and a labor of love to figure out what makes the system tick and figure out what the butterfly needs and then actually put it on the ground. We are hoping to be able to protect some additional properties out here and create more Karner habitat and keep them off the endangered species list.”

The Karner has been released in similar fashion at 26 different locations on the 3,350-acre preserve over the past 15 years, Gifford said. The insect, first studied and named by zoologist and author Vladimir Nabokov in 1944, can now be found at nearly 60 sites covering more than 700 acres of the APBP. Right now there are some 46,100 butterflies on the preserve and 3,000 is needed to qualify for “recovery status.”

“By partnering with U.S. Fish and Wildlife, the Albany Pine Bush Preserve, and other stakeholders, we are successfully advancing the restoration of the Karner blue butterfly at this globally rare and special place,” said DEC Commissioner Basil Seggos. “The Karner blue’s comeback continues to demonstrate the effectiveness of science-based habitat management that DEC and our federal, state, and local partners are implementing to help this endangered species thrive.”

For a release on Thursday, July 15, two dozen wild adult female Karners were captured in the APBP in May and transported to Concord, New Hampshire, where the eggs they produced were raised to chrysalises, or cocoons, and returned to the commission to hatch at the Discovery Center on New Karner Road.

That release was in addition to the 90 released earlier on the Colonie land and more will be released in the coming days. Once released, the hope is the butterflies, which only live for a few days to a few weeks, will breed and start a new colony. On Thursday, one pair was attached before they flew off the mesh and plastic “cages” used to carry them to their new home.

“The Albany Pine Bush Preserve Commission has been an outstanding partner in the recovery of the Karner blue butterfly in New York state,” said David Stilwell, supervisor of the USFWS New York Field Office. “The commission’s expertise in habitat restoration efforts for this species has led to exceeding Recovery Plan population targets for the Albany Pine Bush metapopulation over the past nine years.”

APBP protects one of the best remaining inland pitch pine-scrub oak barrens in the world. This fire-dependent ecosystem provides habitat for many plants and animals, including more than 20 percent of New York state’s wildlife species of greatest conservation need, such as the endangered Karner blue butterfly.

The APBP is a National Natural Landmark, Hudson River Valley National Heritage Area Site, a New York State Unique Area and Bird Conservation Area, and a National Audubon Society Important Bird Area. The commission is a public-private partnership created by the state Legislature in 1988 to protect and manage the APBP and provide the public with educational and recreational opportunities. The commission’s goal is a preserve of 5,380 acres.