Two warehouse projects in front of Colonie Planning Board 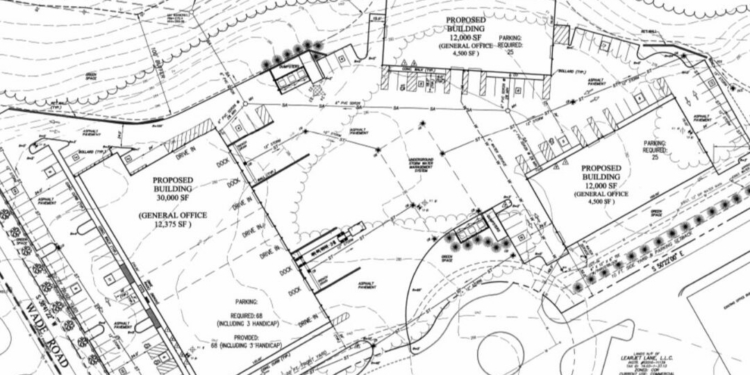 COLONIE — Two warehouse projects working their way through the process were discussed at the last meeting of the Planning Board.

One would construct three, one-story buildings totaling 54,00 square feet on a vacant, 10-acre, parcel of land in a Commercial Office Residential zone at the intersection of Lear Jet Lane and Wade Road.

The board unanimously granted concept acceptance to the project presented by Nick Costa, of Advanced Engineering, on behalf of Lear Jet Lane, LLC, a subsidiary of Rosetti Development. The land is owned by Barry Feinman.

It was first presented in January 2019 and this iteration will need to come before the board at least once more for final site plan approval before construction can begin.

It is within the Airport GEIS and there are mitigation fees associated with the development. It has been calculated at $144,132, or $2,772 per new vehicle trip.

A sidewalk would be constructed from Lear Jet Lane and Avis Drive, on the opposite side of Wade Road from the proposed project, in addition to sidewalks along the front of the proposed buildings.

There are two waivers requested: to exceed the 20-foot maximum setback from the road and to allow parking in the front of the building. There are 95 required parking spots, but there may be some banked parking implemented depending on the number of employees.

The board expressed some concern about the design of the building and requested the sides facing public roads be dressed up a bit.

“The site plan has evolved through the years and we think this is the best plan so far for the property,” said Joe Grasso, the Town Designated Engineer for the project.

The second proposal is for a one-story, 13,000-square-foot warehouse on nearly seven acres in an Industrial zone off Railroad Avenue that involves four different lots that would be reconfigured.

The address for the new warehouse would be 17 Commercial Avenue, which is located at the rear of 49 Railroad Avenue. It would also include 29 and 50 Spruce Street, which is a residential dead end off Fuller Road.

The four lots would still exist, but be reconfigured to accommodate the new building. They are all owned by Peter Luizzi, who is the applicant.

Grasso said this iteration does shift the building away from the residential properties along Spruce Street but emphasized the need for buffering which may come in the form or an earthen berm or more tree plantings.

He said the town should take care in realigning the lot lines in regards to setbacks and access to each lot, parking and greenspace on each lot.

The board also had some questions about the building’s use. Costa said it will be where the yet to be named tenant will maintain trucks and other equipment.

The project was before the Planning Board for sketch plan review. It would need to come back before the board at least twice, for concept acceptance and final site plan review, before construction could begin.

Ian Knox: ‘Honored’ to be next principal at Hamagrael Elementary