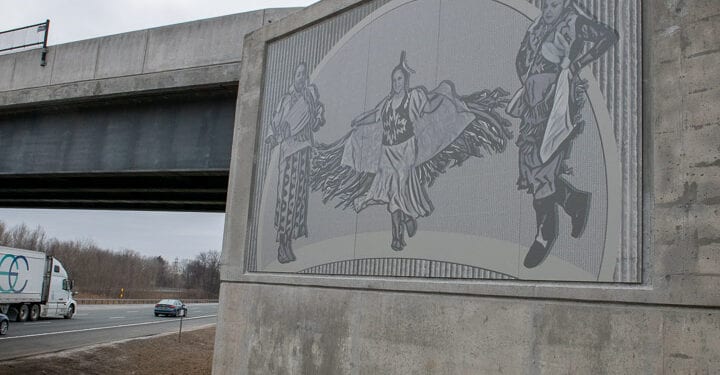 COLONIE — After a slight delay and some concern about the state reneging on the deal, four murals were installed on the new Northway Exit 3 flyover ramp earlier this year to honor the area’s Native American heritage.

The murals “are a celebration of the region’s diverse people and past, one that recognizes the Native American tribes that still very much identify this areas as part of our ancestral homelands,” said Heather Bruegl, director of cultural affairs with the Stockbridge Munsee tribe.

“It is important and meaningful to have a visible representation such as this in our original homelands. The dancer mural is meant to spark interest and respect of our indigenous history and culture today,” she said. “We are very happy that there is something in a very visible area that celebrate our Indigenous identity. It is super important to have the representation in an area that often times seems to forget that those are our homelands.”

The state reached an agreement with two of the tribes that used to live in the area in 2014. But in 2019, more than a year after the new Exit 3 opened, the murals were not yet installed and the state Department of Transportation asked the tribes to reconsider the deal, according to the Democrat and Chronicle newspaper out of Rochester, and instead offered to build a park-like path that would feature the images.

“It is a mystery to us why the murals are not installed,” Shannon Holsey, president of the Stockbridge-Munsee Community, a Wisconsin-based tribe that inhabited much of central New York in the 18th and 19th centuries, told the newspaper late last year. “I understand the murals were even already produced, and just have not been installed. I would like an explanation as to what is going on.”

In January, the state Department of Transportation issued a press release announcing the murals were in fact going to be installed as originally planned, on each side of the new ramp where they would be seen by hundreds of thousands of motorists heading north and south on I-87 each week.

“We are excited that this historically and culturally significant component of the Albany Airport Transportation Corridor project will be complete,” Commissioner Marie Therese Dominguez said. “The addition of these beautiful murals to the bridge abutments will be appreciated by millions of visitors and motorists every year.”

The flyover ramp is part of a $50 million project that also re-configured Exits 4 and 5 to make it easier to get from the Northway to the Albany International Airport and help traffic flow on streets around one of the most congested areas of town. It was done at the same time millions were invested into the airport including a 1,000-space parking garage.

Native Americans lives along the Hudson and Mohawk rivers across New York and three were prevalent in where Exit 3 ramp was constructed: the Delaware Tribe of Indians, the Saint Regis Mohawk Tribe, and the Stockbridge-Munsee Community Band of Mohican Indians.

During construction of the overpass, stone tools like projectiles for hunting and scrapers to clean animal hides were found dating to between 4,500 and 10,000 years ago, and three tribes wanted the project to avoid the archaeological site. Instead, they agreed to the murals and a plaque explaining what the tribes’ history on the land.

After some pressure by the federal Highway Administration, which oversaw the project, the DOT fulfilled its end of the bargain earlier this year.

LETTER to the EDITOR: BCSD superintendent seeks end to hate on AAPI community