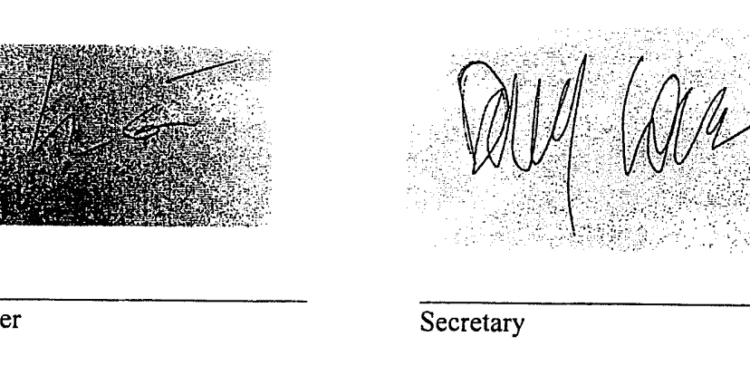 The authorization signatures on the WFP designating petitions

Working Families Party designating petitions across the state appear headed to court after Republicans spotted an irregularity in the witness signatures of the presiding officer and secretary.

According to Albany County Republican Board of Elections Commissioner Rachel Bledi, the signatures by presiding officer and secretary are either a stamp or a cut and paste which violates state Election Law. In addition, she said, they are photocopies rather than originals.

“The whole point is the notary is supposed to watch you sign the document so no two signatures should look exactly the same and have a box around it,” she said.  “It opens the door to questions regarding fraud. There is no way to validate a certificate based on a photo copy.”

She provided the designating petition documents for Dutchess, Green and Albany counties and the signatures of Jonathan Westin as WFP presiding officer and Daniel Langenbucher as secretary are exactly the same and all three include the same exact black box around each of the signatures indicating it is a stamp or a photo copy.

Anita Thayer, the secretary for the Capital District WFP, said the signatures were not photocopied or stamped but scanned which is allowed under the current Election Law as modified by the state during the COVID-19 pandemic.

“Our WFP authorizations (ie permission for our candidates that are not WFP registrants to run on the WFP ballot line) were filed in accordance with current Election Law, regulations, and the governor’s executive orders,” she said, “We anticipate that county BOEs will uphold the law and accept our authorizations regardless of Republican talking points.”

It is unclear how many candidates the court action will include but in Albany County there are candidates running with the WFP line in Colonie, Bethlehem, New Scotland, Guilderland, the City of Albany and in most municipalities outside of villages. If the signature sheets in other counties are the same as those supplied by Bledi, it could be impact hundreds of races across the state.

New York is one of a handful of states that still allows minor parties to endorse major party candidates. The Working Families Party generally endorses Democrats while the Conservative Party endorses Republicans. They are the last two minor party lines that got enough votes to gain automatic ballot status in this November’s general election.

The process, generally, is candidates get a required number of petitions from voters enrolled in the respective party and then the party officials sign off on the petitions, granting permission for the candidate to run on the party’s line.

Rules were changed this year regarding the number of signatures and even the process of validating them. But Bledi said while the state did allow a notary public to witness the signature via zoom or other video conferencing platform, it still requires an actual signature rather than a stamp and it requires the actual signature is handed into the Board of Elections and not a photocopy or facsimile thereof.

She said there is precedent based on a New Scotland case where an enrolled Conservative Party member attempted to file paperwork by fax to run as a Republican. In the end, the Court of Appeals, the state’s highest court, ruled the Albany County BOE could not accept paperwork by fax but instead had to have the original documents.

The first court case could come as soon as the middle of this week, Bledi said.