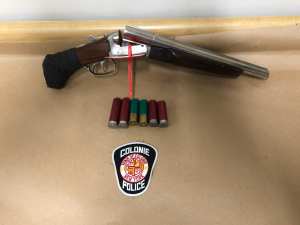 COLONIE — An 21-year-old Amsterdam man was arrested on Sunday, Oct. 17, for allegedly possessing a sawed off shotgun.

According to Lt. Robert Winn, police were called to Motel 6 on Central Avenue at around 3:51 p.m. for reports of two people staying in an unrented room.

The two fled the scene and headed west on Central Avenue and were located in the parking lot of the Howard Johnson’s Motel by patrol officers Ardit Potka and William Guthrie.

While being interviewed, one of the men, Juan Vazquez, lied about his identity to prevent the discovery of a warrant out of Amsterdam.

While being taken into custody for the warrant the lying about his identity, officers found a loaded sawed off shotgun in his backpack.

The weapon, a Stroger 12-gauge, was loaded with two shells and had its barrel altered making it illegal to possess. The origin of the weapon is still being investigated.

The motel declined to pursue charges for trespassing in the room and Amsterdam police were advised that the defendant was being sent to Albany County jail. The second subject was not charged and was released at the scene.

Vazquez is charged with the felonies of criminal possession of a weapon and the misdemeanor of criminal impersonation.