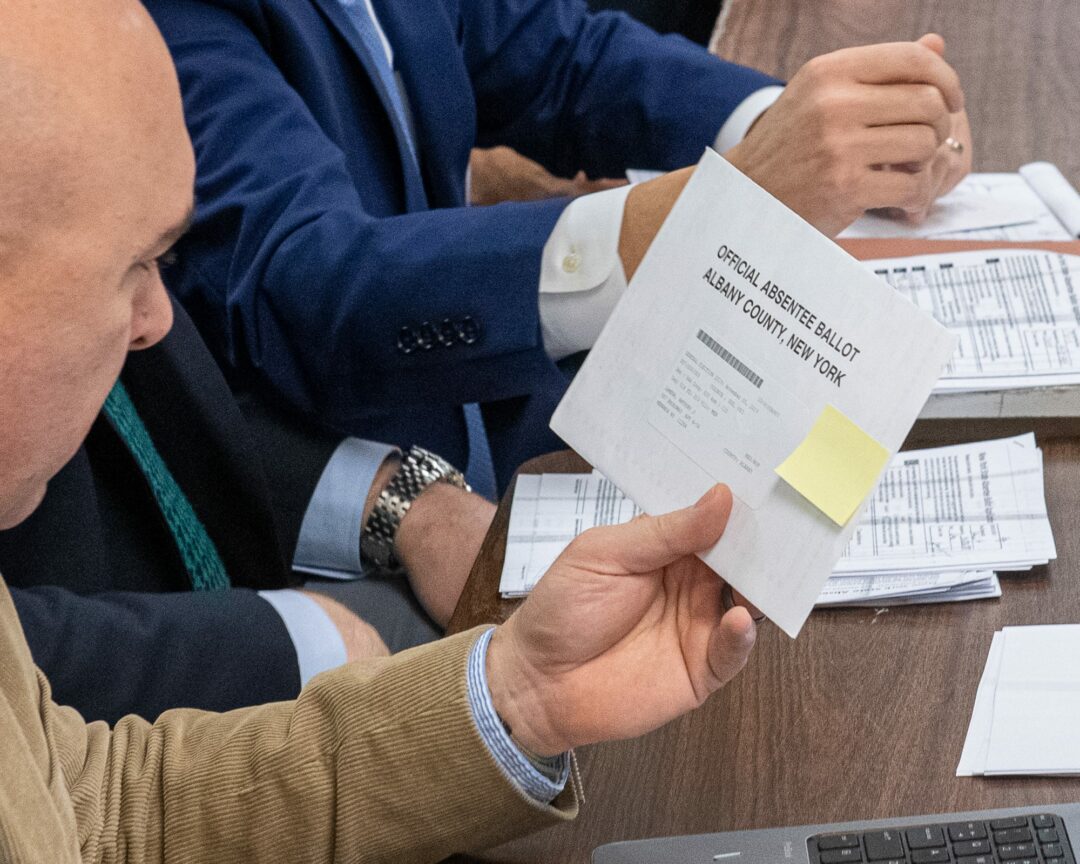 An official examines absentee ballots at the Albany County Board of Elections on Tuesday, Nov. 19. Jim Franco/Spotlight News

COLONIE — After the 750-plus absentee ballots were tallied at the county Board of Elections, Supervisor Paula Mahan extended her Election Day lead and will serve a seventh two-year term.

On Election Day, Mahan held an unofficial 62-vote lead, 10,269 to 10,207, over her challenger Republican George Scaringe. That lead grew to 108, less than half a percentage point of the total votes cast.

“This was a very different type of campaign. I think they basically ran a smear campaign. It’s the dirtiest I have ever seen but everything turned out well,” Mahan said. “I am very pleased with the outcome and grateful for all the people who worked on my campaign and who came out to support me. I feel honored to have a seventh term to serve all the people of Colonie.”

After about 500 absentee envelopes and ballots were inspected by both sides and counted on Tuesday, Nov. 19, Mahan’s lead had grown to 122 and Republicans called it quits and counting by hand stopped. Instead, BOE employees just opened the remaining ballots and ran them through a machine to count.

Scaringe, a longtime Albany County and Town of Colonie Republican chairman, was making his first run at elected office.

“While we lost by roughly 100 votes, I believe we ran a strong and professional campaign,” Scaringe said. “I want to thank everyone who volunteered and contributed to my campaign for all their hard work and support. I congratulate Supervisor Mahan on her victory and I wish her all the best in her next term in office.”

Despite the fact there was early voting for the first time in state history, which allowed voters to cast ballots nine days prior to Election Day at select polling places, there were about 3,200 fewer votes this year than two years ago. Mahan said, while disappointed in the turnout, that complacency was a concern because upset people are apt to vote while those who think things are going well are not as motivated.

“While walking through town, people were positive and seemed to be happy with the way things were going so we tried to stress how important it was to get out and vote,” she said. “I’m glad they are happy, and I am glad things worked out how they did but such a low turnout is disappointing.”

When Mahan gets sworn in, she will have three new members of the six-member Town Board to work with. Newcomers Republicans Rick Field and Danielle Futia and Democrat Jill Penn will join incumbents David Green, whose enrollment changed from Republican to Democrat after Election Day, Democrat Linda Murphy and Democrat Melissa Jeffers Von Dolen.

Democrat will have a 4-2 advantage which grows to 5-2 when Mahan is counted, but in the past the Town Board members of both political stripes have worked well together.

“Certainly we welcome them [new members] and hopefully they will focus on the job and work together,” Mahan said. “We had a good team for several years we had different parties working together. We lost two outstanding members, Paul Rosano  did an excellent job and thy were here or all the people of Colonie and put party politics aside and they should be commended for that. They did an outstanding job and we will miss them.”

Mahan first beat entrenched Republican incumbent Mary Brizzell in 2007 by about 200 votes and since has made much out of straightening out the town’s finances and setting the fiscal end of things in order. The stunning victory put Town Hall in the hands of Democrats in what was a bastion of Republican strength in Albany County.

Since, Republicans, in an effort get back the power they once had in the county’s largest town, have thrown some formidable candidates at Mahan but this was the closest race since she beat Denise Sheehan in 2011 when she won by less than 300 votes.

This campaign did get somewhat nasty, with Scaringe and the Republicans running on the tried and tired platform of not enough paving, too much taxing and spending and not enough transparency. This year, Scaringe, took advantage of what some municipalities see as a positive, too much new development.

He said, during the campaign, Mahan and her administration were catering to developers while ignoring the neighborhood concerns and that development added to traffic congestion while at the same time taxed the town’s already fragile infrastructure.

Mahan, on the other hand, pointed to her administration’s use of a Town Designated Engineer which made the process more fair for all those involved. She said a focus has always been the re-development of existing sites that are dormant like the former Starlite Theater which is now home to the Ayco headquarters, Latham Circle Mall and the new retail along Route 9.

Much of the traffic congestion, she said, is out of the town’s hands in that most of the vehicles are just passing through, from Albany to points north, on roads owned by either the county or the state.

And, she said, the town is spending record amounts of money on infrastructure improvements.

This year a new wrinkle was added by the Republicans by pointing out Mahan has bene double dipping since 2016 by collecting her full pension from working 29 years in the North Colonie School District and her full supervisor’s salary.

Mahan fired back by accusing Scaringe of having a “no show” job with the state Hudson River-Black River Regulating District where he, according to the New York Post, earned $63,000 a year for working four hours a week.

For the next two years, Mahan said it will be business as usual and she will focus on a number projects already in the works that include infrastructure improvements, the library upgrade, new LED street lights and the ever challenging budgetary issues.

Asked if this would be her last two years she said: “Right now I’m thinking about what I will do tomorrow. Right now I want to focus on this job. That’s what I was elected to do so that is what I am going to focus on.”