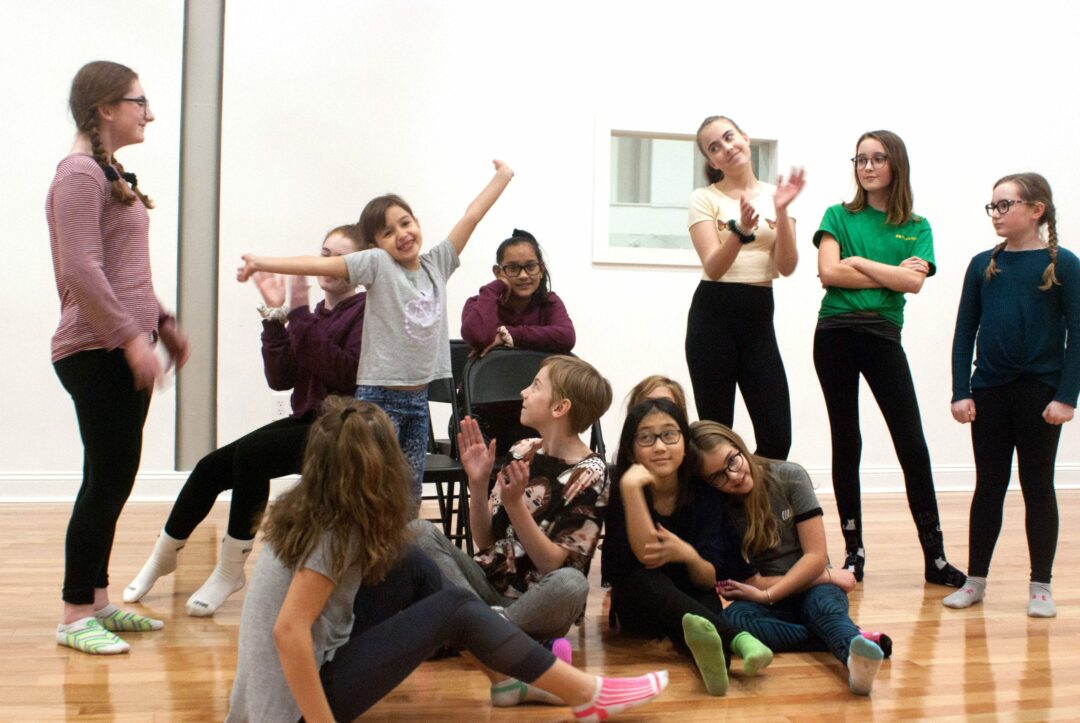 The cast of ‘Annie’ is all smiles during the Park Playhouse’s rehersal of the Tony Award-winning musical. It is set to run from Dec. 17 to 22. Photos by Diego Cagara/ The Spot 518

ALBANY — Park Playhouse will stage the Tony Award-winning Broadway musical, “Annie” for the holiday season and its cast has been busy with rehearsals since early November.

Park Playhouse’s “Annie” production will run from Dec. 17 to 22 at Cohoes Music Hall; tickets and times are now available online at www.thecohoesmusichall.org/new-events/2019/12/17/annie. Tickets are $20 for adults and $15 for students aged under 18. Around 35 students from across the Capital District populate the production’s cast and their ages range between eight and 18.

Set in 1933, “Annie” revolves around an 11-year-old orphan girl who dreams of finding her parents, struggles to escape the Municipal Girls Orphanage and its bitter matron, Ms. Hannigan, and is taken in by billionaire Oliver Warbucks in time for the holiday season.

“The end of the show is a big Christmas celebration so it seems like a perfect show for the kids that we have right now and for the holiday season,” said choreographer Ashley-Simone Kirchner. “And I really wanted to make sure that in this season particularly, we did a lot of musicals that have strong female characters and are female-driven. With shows like ‘Annie’ and ‘Matilda,’ it’s about these strong young girls, not being scared of who they are and they’re like the driving force behind the shows.”

Kirchner has been involved with Park Playhouse since being an ensemble dancer in 2010. She is joined by director Chuck Kraus, who said he had started in its youth program in 1998, and “Annie” is his fourth time directing now. Auditions were held in early September.

Both agreed that beyond just staging the musical, it was important to educate the young cast about what happened in 1933 like the Great Depression and the civil unrest it caused.

“With any production with our students, it’s a great opportunity to kind of give them a different look at how you can approach theater and I believe very much in trusting them,” said Kraus. “When I direct them, it’s important to empower them and all these kids are so bright and creative. I don’t want to just tell them where to stand or how to say a line.”

Speaking of the cast, the young group was excited, prepared and animated during one such rehearsal on Thursday, Nov. 21. Although just practicing vocals and choreography in casual wear inside a bright rehearsal studio, none got distracted with conversations about the upcoming Thanksgiving break and neither props nor costumes were in sight.

Middle School, plays Pepper, a bossy orphan who is not close with Annie at the orphanage. “I really love Park Playhouse and the people here, and doing theater around Christmas time are two of my favorite things so I love I get to combine them,” she said.

Luca Verner, a Bethlehem High School senior, plays the hostile Ms. Hannigan and she said she had acted as one of the orphans in a previous “Annie” production four years ago.

“That had been one of my first ever shows and I thought it would be fun to do this show as an older kid now as Ms. Hannigan and looking down at all the orphans is such a fun thing,” she said. “I thought of Ms. Hannigan as more of a caricature but I’ve come to realize that she’s a really grounded, down-to-earth kind of person. Getting to know my character was initially a struggle for me but I’ve gotten better.”

She added that she has enjoyed being led by Kraus and Kirchner “because we connect a lot on a lot of creative things and it’s cool to bounce ideas off of them and give them as much as I can do.”

“I’ve done a lot of the shows at Park Playhouse since sixth grade and Rooster is a really fun character to play,” he said. “I get a lot of freedom with what I can do, like with my dancing. Chuck and Ashley really have pushed me to be more out there as my character is very out there and I’m not like that. I wouldn’t say I’m an introvert but with my acting, I don’t usually play the confident kind of characters and this is my first time doing that.”

When asked if they wish to seriously pursue theater in the future, smiles lit up. Johnson said she plans to continue acting in high school and professionally one day while Jantson said he envisions himself being a stage director. Verner said, “I’m planning on taking a gap year, moving to the city and auditioning for shows and also hopefully audition for some schools. I want to do this as a career, yeah.”

Kirchner said she has enjoyed building relationships with kids through the years and helped foster their love for theater.

Kraus chimed in, “This show, in particular, is cool too because usually with our education programs, they are kind of segmented by age — younger kids do their own productions and the older high school kids do their own. Because of how ‘Annie’ was written with all the young orphan characters as well as older characters, it’s been a lot of fun and a good opportunity to get all of them in a room at the same time.”

Looking ahead, Kirchner concluded, “This is such a heartwarming holiday classic and for families looking for things to do around the holidays, we’ll have them feeling festive. The kids have been magical.”

The cast of ‘Annie’ is all smiles during the Park Playhouse’s rehersal of the Tony Award-winning musical. It is set to run from Dec. 17 to 22. Photos by Diego Cagara/ The Spot 518