UPDATED: Mahan beating Scaringe by 62 votes with 726 absentees to count 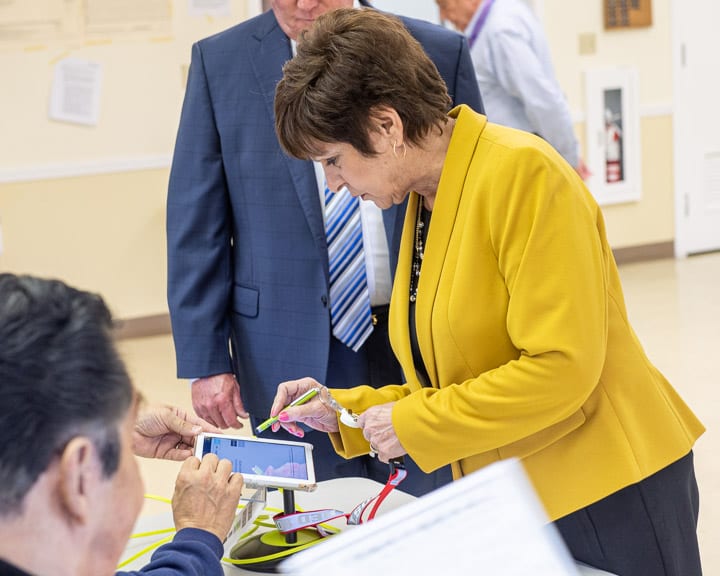 COLONIE — Incumbent Supervisor Paula Mahan holds a narrow 62-vote lead over challenger George Scaringe, according to unofficial results from the Albany County Board of Elections.

With all Election Districts counted, Mahan has 10,269 votes and Scaringe has 10,207. As of Wednesday, Nov. 6, there are 726 absentee ballots to be counted. Absentee ballots must be post marked no later than the day before the election, and the Board of Elections must receive them no later than seven days after the polls close.

As of Wednesday, the date for the Board of Elections scheduled to count Colonie ballots is Nov. 19. According to party officials, the breakdown of absentee ballots by party affiliation is:

The absentee voters affiliation is known when he or she applies for a ballot, but how the vote is cast is not known until the arduous task of counting begins and the ballots are actually opened.

“We are 62 votes ahead and that is better than being behind,” Mahan said at the Democratic Party gathering at Swifty’s on Everett Road after the numbers came in. “I think we ran a good campaign. Respectful and honest and it’s up to the people to see how things turn out with the absentees. I’ve always said, the town is in a great place and that’s where I want it to be so we will see what happens.”

The Republicans gathered at the Blu Stone Bistro on Albany Shaker Road to await the results.

“We ran a hard race against a tough incumbent and while we came up a little short on Election Day I believe my campaign will be victorious after all the ballots are counted,” Scaringe said.

Mahan is looking for her seventh, two-year term while Scaringe, a long time political party chairman, is making his first run at office.

Also, according to the unofficial results from the Board of Elections, it appears two incumbents on the Town Board will not return and three new members will be sworn in on Jan. 1, 2020.

Democrat Brian Austin got 9,086 in his second bid for the board.

Right now there are four Democrats on the board, with the registration of member David Green officially changing from Republican to Democrat the day after election, and two Republicans. Town Board member Jennifer Whalen, a Republican, opted instead to run for the Albany County Legislature. She did not have an opponent.

If things stay as they are now, come Jan. 1, 2020, things will not change and the Democrats will still have a 4-2 majority on the six member panel.