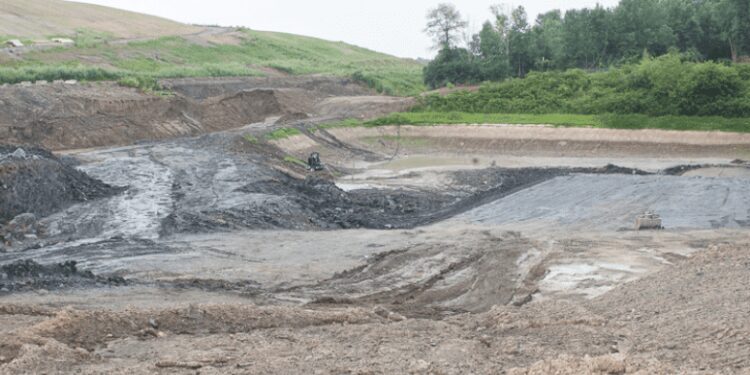 The new cell of the Colonie landfill as it looked in August, 2018. To the left is the main mound of trash and past that is Cresent Road and eventually the Mohawk River. Jim Franco / Spotlight News

COLONIE — The town and the landfill’s operator, Capital Region Landfills, Inc., were fined nearly $40,000 by the Department of Environmental Conservation for allowing stormwater to run off the site into the Mohawk River.

According to the Order on Consent issued by the DEC on Monday, Feb. 11, the issues were directly related to how stormwater was managed on two days in August, 2018, two days in September, 2018, and a day in November, 2018.

“On Sept. 8, 2018, during the course of a high intensity rainfall event, turbidity was detected leaving the site at multiple outfalls around the site due to the inadequacy of the various storm water controls that were in place,” according to the consent order.

Turbidity is the degree water loses its transparency due to the presence of solids, like dirt.

“On November 2, 2018 storm water was observed coming in contact with exposed solid waste. The resulting leachate was discharging into Cell 1 of the Area 7 construction, an area that does not contain a leachate collection and removal system. At the time of inspection, the leachate was being pumped to stormwater retention basins,” stated the consent order.

Matt McGarry, a town engineer in charge of solid waste operations, said the issue came about because of heavy rainstorms that saturated the site and some surface mud may have gotten into the river but he stressed it was not “landfill soil or contaminated soil and we are not talking about leachate. It was simple turbidity, which means Colonie clay.”

“This is much to do about nothing,” he said. “This is a very managed and highly inspected system.”

He said because of the heavy rain, stormwater became too much for the drainage ditches to handle and some did cross a two-foot gap between the existing liner and the new liner that was being installed.

It was noticed nearly immediately, he said, by one or all of the three entities that routinely monitor and inspect the site and the stormwater was pumped out and diverted. The water that did seep into the gap between the liners could have been contaminated, McGarry said, but said there is no way contaminated water was discharged into the river.

He said nearly every consent order issued by the DEC has a compliance schedule but there was none on this one because everything the DEC saw was taken care of immediately.

“It’s not like we are sleeping out here,” he said. “The site is inspected multiple times a week by a third party and everything was managed under the Best Management Practices which we continue to improve. Even the DEC acknowledged it was a high precipitation event.”

The town was fined $19,125 and Capital Region Landfills was fined $20,000. McGarry said, under the long term agreement, the landfill operator is responsible for paying any and all fines.

The fine was first reported by the Times Union.

The landfill is currently undergoing an expansion and a seven-acre cell was recently completed and is now awaiting final approval from the DEC before it can be filled with trash. That final approval could happen as early as next month.

The new cell is located to the right of the transfer station and on the opposite side of the large mound of trash from the river.

After that is completed and as it gets filled, the town will move on and begin constructing the next cell. The most recent consent order should not impact the approval process, McGarry said.

Last year, the DEC granted the expansion permit with some stipulations including  shrinking the vertical expansion by 50 feet, making the new height 467 feet from the existing roughly 430 feet above sea level, increasing the setback from the Mohawk River to 500 feet from 100 feet and requiring a DEC representative onsite full-time to monitor activities.

In all, the expansion, known as Area 7, represents 105 acres that will increase the footprint by 23 acres with the remaining 82 acres expanding vertically over the existing cells.

Kubricky Construction is well under way in building Phase 1, the seven-acre “hole” to the south of the transfer station and it will have a life of about two and a half years. The next phase is a 12- to 15-acre cell.