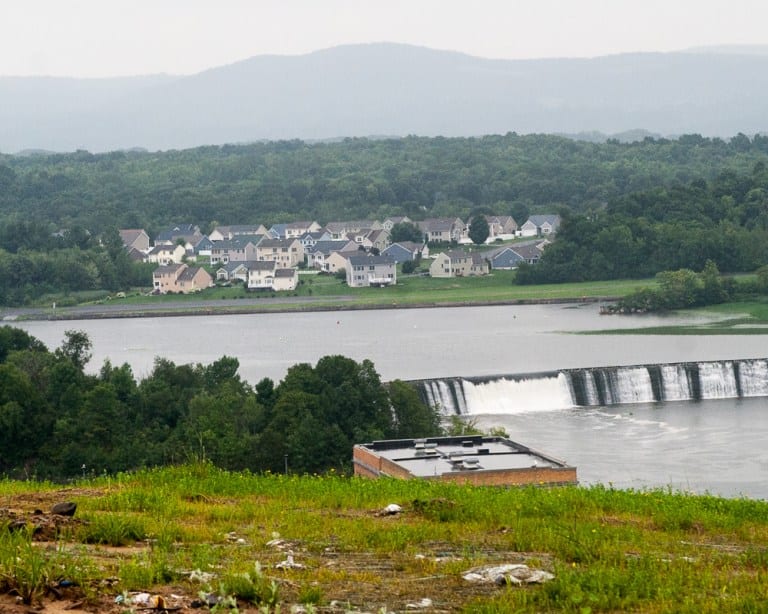 A neighborhood in the town of Waterford as viewed from the top of the Colonie Landfill. Jim Franco / Spotlight News

ALBANY — A lawsuit brought by two towns upstream — and sometimes downwind — of the Town of Colonie Landfill on Route 9 was dismissed based on a judge’s ruling that Waterford and Halfmoon do not have proper standing.

“I feel the decision that was issued is a strong decision and the judge certainly cites enough case law to back it up,” said Colonie Senior Attorney John Spath. “It dealt with the issue of standing, so it didn’t get into the underlying merits.”

Acting Supreme Court Judge Debora Young, in her one-page ruling, said that according to the New York State Environmental Quality Review Act, for a party to have standing it must allege “specific environmental injury which is in some way different than the public at large.”

“Generalized environmental concerns will not suffice and, when no zoning-related issues are involved, there is no presumption of standing … based on a party’s close proximity alone,” she wrote. “Here, petitioners have not demonstrated that they will suffer an injury that is different in any way than the public at large. Generalized assertions regarding air quality, water quality and noise are insufficient.”

The suit, filed in May, 2018 named the state Department of Environmental Conservation, the Town of Colonie, and Waste Connections, the private firm working under the name Capital Region Landfills while running the day-to-day landfill’s operations.

Jack Lawler, the supervisor in Waterford, said there will be an appeal forthcoming, a notice of which must be filed within 30 days.

“It’s pretty obvious we would strongly, respectfully, disagree with Judge Young’s rationale,” he said. “It’s hard to understand how the people who can see the landfill, and smell the landfill and hear noise from the landfill, have less standing than the general public who don’t experience any of those things.

“The merits of our argument are pretty strong, and we look forward to making our case in court.”

Basically, the towns claimed not enough care was taken before approving a 93-acre expansion, specifically the seriousness of the threat presented by piling more garbage on top of the unlined sections of the landfill and the threat that poses to the nearby Mohawk River. Also, the application failed to follow the legal requirements to explore alternative sites for the garbage that is taken to Colonie now.

Lawler said if it were a new application, the DEC would never have approved piling “12 million tons of waste on an already toxic landfill that is 100 feet from the river.”

“The arguments for the landfill is an economical argument that benefits the Town of Colonie and tramples all over good environmental policy,” Lawler said. “I believe there has been political pressure brought upon the DEC to make this approval. I believe the governor’s office is involved in this, and other government officials have aided the approval.”

Furthermore, the lawsuit claimed, the landfill was injurious to the residents because they would have to view the mound of garbage that will get considerably higher under the expansion. But, Young wrote, the view from Waterford and Halfmoon is not any different than anyone else’s so the petitioners have no standing.

“Finally, it is notable that not one of the petitioners are less than 500 feet from the landfill as there is 500 foot setback from the Mohawk River thereby making any petitioners’ homes beyond the threshold proximity,” she wrote.

The DEC approved a request to expand the 212-acre site in April, 2018 after four years of study, public comment and modification.

The DEC did scale back the original proposal, though, and what is known as Area 7 will now be 500 feet from the Mohawk River rather than 400 feet; and the vertical expansion will rise to 467 feet above sea level, 50 feet less than originally proposed.

Only about 23 acres will be on new ground while the rest will be a vertical expansion over Areas 1 through 6.

Also, the DEC is requiring a third party be onsite to monitor landfill operations.

Without the expansion, the 50-year-old landfill would have reached capacity before the end of this year. The additional acreage will allow it to remain open through at least 2038, depending on how much tonnage is dumped.

Kubricky Construction, a Latham-based company, is currently building Phase 1, a seven-acre “hole” to the south of the transfer station and that will have a life of about 30 months. Sometime within those 30 months, provided the plan is not changed by the courts, construction on the next 12-15-acre cell will begin.

In November 2018, Young tossed a request by the two towns asking the judiciary to stop construction while the lawsuit was pending.

Construction is not relevant to the lawsuit, though, and should Waterford and Halfmoon prevail, the money spent on the expansion to this point would be wasted.