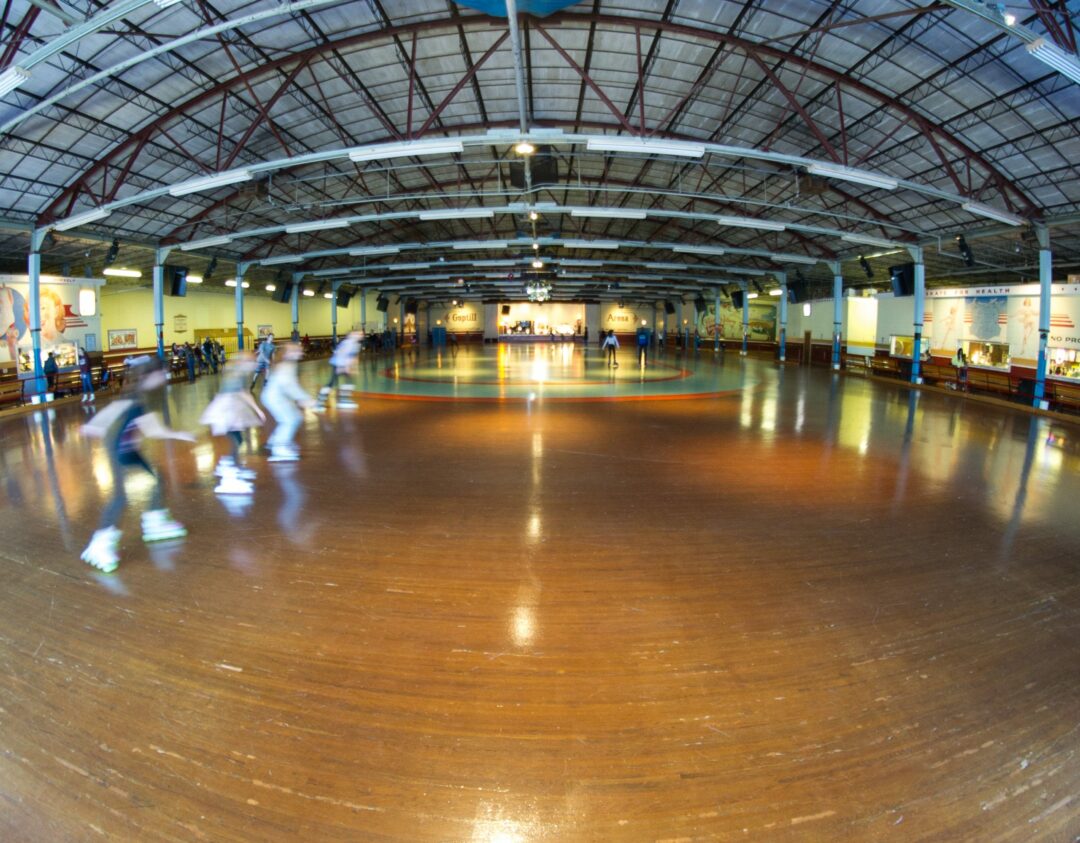 LATHAM — Millions of tiny wheels have made countless laps around Guptill’s Roller Skating Arena. Up to four generations of families have made that happen, making Guptill’s one of the last thriving long-standing family-owned businesses in the Capital District.

“We’ve always been a safe spot for kids, teens and adults to have fun and spend time together,” Wes Guptill, part-owner, said. “Hundreds of thousands of people have come through those doors looking for quality family fun.”

Guptill’s is an icon in the Capital District. The rink itself is the same oak that was put down when doors first opened in 1951. When you walk through the doors, 1950s-inspired lights and decorations greet you. Guptill’s father, Skip, has always maintained the retro feel of the rink, only updating the “guts,” if you will, of the rink to keep up with the changing times. This includes the sound system, light show machines and most importantly, the music that is played.

“[My father] always wanted to keep the feel of the rink because it’s just Americana,” Guptill explained. “You come here, you make friends, you skate around, you make memories that you will then share with your children, your grandchildren, your family and your friends.”

Guptill’s was just a roller rink until 1979. As disco began seeping into American radio waves in the late 1970s, the family saw an opportunity to expand their entertainment empire. In 1979, dance club Secrets was opened, along with a video gaming room. Like the rink, the dance club was alcohol-free and supplemented with impressive light shows and an impressive playlist. Guptill explained the dance club, now a teen hotspot, was originally for adults.

“It became a destination for those 18 to 21 years old around 1985,” he explained. “When the drinking age was raised in 1985 to 21, many people were shut out of the places they were planning to attend. The dance club became a place they could go and dance, hang out with friends and have a night out.” Guptill added the evolution of the dance club’s primary audience has shifted as the generations have gotten older.

“Around 1990, high schoolers would come to Secrets more. In 1995, middle schoolers began showing up in greater numbers,” he said. “Now, we’ve noticed, since around 2010, it’s families. Parents with young children who want a safe place to spend time together and make lifelong memories.”

Guptill continued the rink has always been for all ages. While the dance club has evolved with the times, the rink has faced the revival and death of fads like roller skating and rollerblading. One thing has not changed for the family, though — regardless of what wheels people put on their feet, they would come to Guptill’s.

“Roller skating is now back in a huge way,” Guptill said. “In the ’90s, we saw so many people with rollerblades or in-line skates. Now, skating is back and kids are not learning to rollerblade the way they did 20 years ago. It’s all on skates.”

The iconic hard-wood floor has been maintained every single day since the business opened. Every day, staff members clean and patch up any minor scuffs the floor might have gotten from skaters. Once a year, the entire floor is refinished, slathering a fresh coat of polish across the three rinks.

“It’s hard work, but it keeps things authentic and maintains the Americana of the business,” Guptill said.

The indoor rink, which is broken up into three areas, occupies a record-breaking 44,000 sq. ft. The main rink alone is 36,000 sq. ft., with the beginner’s rink and kiddie rink cumulatively totaling the other 8,000 sq. ft. Because of the impressive size, Guptill’s is not just the biggest indoor roller rink in the country, but in the world. It wasn’t planned to be that way, though, and the Guptills did not seek out the record-breaking title.

“We did not necessarily set out to be the biggest,” he explained. “We knew we were bigger than anywhere else we had seen, but had no intention of trying to get the world record.”

That all changed in the 1970s when representatives from Guinness Book of World Records visited the family in Latham. They had heard about the large rink and were impressed.

“They asked us for the blueprints because they wanted definitive proof the dimensions were,” Guptill recalled. “They didn’t lie down tape measures and start hatching out measurements.

“Avid skaters come here to see the rink and to skate,” he said. “We have people coming from New Jersey, Vermont and Massachusetts, among other states, to stay the weekend and have some fun.”

The success is only expounded by the adjacent ice cream stand that opened in 1995, which is now known as the Capital District’s ice cream stand, he said. The family’s drive for quality in everything it does has resulted in Guptill’s Coney Express becoming synonymous with the area’s love for ice cream.

“People will not travel far usually for ice cream; they will go to the stand that is closest to their house,” Guptill said. “That’s not the case here. People travel from neighboring towns and counties to get the ice cream. It truly belongs to the Capital District now.”

Today, the business is doing as well as it ever has, Guptill explained. He credits this to the resurgence of parents and children wanting to participate in a physical activity instead of sitting around and dawdling on technology.

“Skating is a participatory sport because you can skate up to someone and ask to do a lap together, or you can meet your friends and skate in a group,” he said. “It’s not like bowling, another sport of the ’50s where it’s really a more independent sport.

“People want to make memories that will last a lifetime,” Guptill continued. “We have couples who come in and tell us they met here. We have lifelong friends who come in and tell us their friendship was sparked on this rink. Those great memories will be passed down to the next generations, who will make their own memories and continue the cycle.” Guptill added the rink has now almost lasted four generations.

“One of our mottos is fun, smiles, memories,” Guptill concluded. “That’s what we’re about. We want to provide a safe, fun place for parents to feel comfortable bringing their children or dropping them off for an afternoon while they go run errands or work. We want to be at the top of the roller skating business, and we think we’ve done a great job at being that for the area and beyond.”

DISCOVER LATHAM & BOGHT: Ayco developing on the long-vacant lot of land once the site of The Starlite Theater