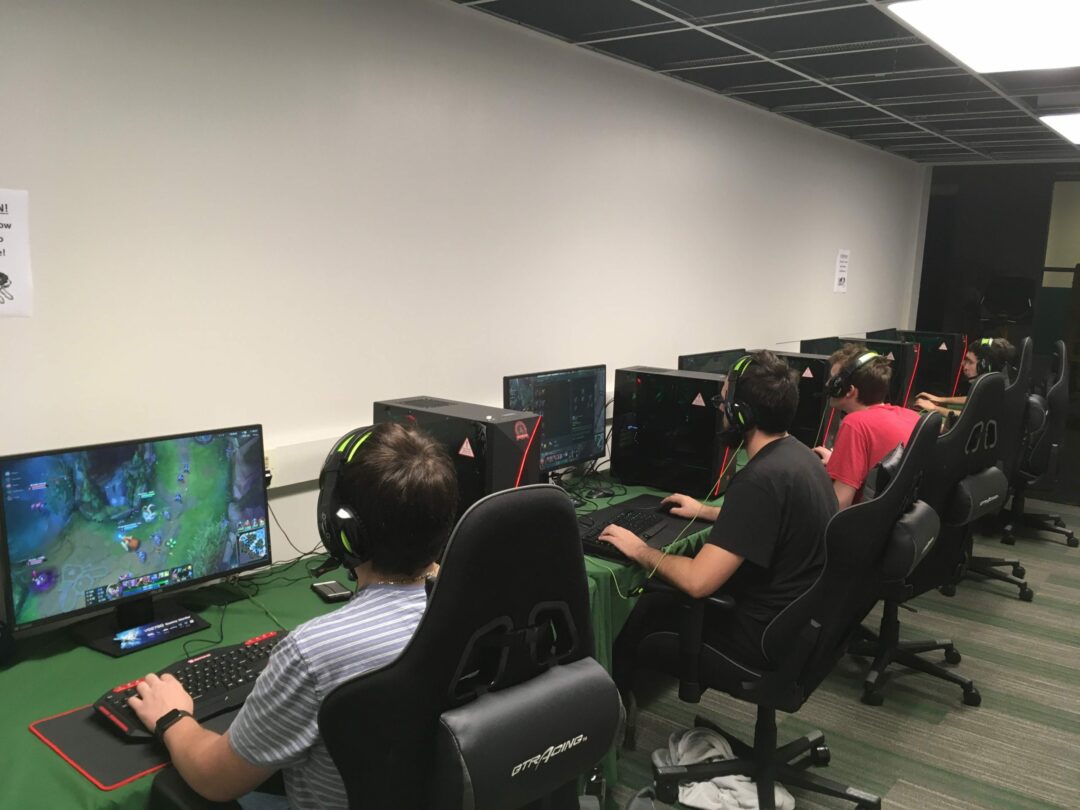 LOUDONVILLE — Video gaming has previously been seen as a leisure activity or hobby, but Siena College has changed that mindset and taken it more seriously, after having established its new eSports team this past year.

“This is the future right here,” said Dennis Bates, the college’s Associate Director of Finance and Operations. “Gaming is the future.”

His words rang true as Newszoo, the leading supplier of gaming and eSports data, has revealed in its latest quarterly 2018 Global eSports Market Report that the eSports industry would hit $906 million in global revenues by the end of the year, a major increase from 2017’s $655 million. Factors include media rights, advertising, sponsorship, game publisher fees and merchandise.

North America has also been projected to generate around $335 million or 37 percent of global eSports revenues. China takes up 19 percent with $172 million and South Korea is 6 percent with $54 million, while the rest of the world is at 38 percent with $344 million.

2019 is projected to be the year that global revenues reach over $1 billion. Meanwhile, video games like Fortnite and League of Legends have also become cultural phenomena and commercial breakthroughs.

Bates added that Siena has invested around $10,000 into its eSports team, which he said “sounds like a lot but not really when compared to other schools. I think I heard Canisius College got $60,000.” Despite this minimal investment, he expressed gratitude that the team has made the most of it, having been given a board meeting room, a row of high-tech gaming computers and a banner, all located through one hallway at the campus’ Marcelle Athletic Complex.

Junior student Joel Madru, the eSports student manager and one of the first team members himself, said that this closely-knit setup “is great for practice and once everyone’s here, we’re locked in, ready to go. It also helps build that sense of team and community because we’re all down here playing together.”

The hallway used to be a racquetball court and Bates revealed that he hopes to expand to a bigger space elsewhere in the complex or on campus for the eSports team, with more branding. The team also hopes to make use of Twitch, an online streaming service, with TV screens to stream games to make their eSports space more engaging and interactive.

The team’s origins dated back to around this past February, when the Eastern College Athletic Conference and the Metro Atlantic Athletic Conference wanted to organize a tournament in Albany for eSports, according to Bates. This resulted in the inaugural ECAC eSports Invitational at the Albany Capital Center on Mar. 1—as part of the MAAC Basketball Championships Fan Fest—which included panel discussions on intercollegiate eSports and an actual League of Legends tournament.

Bates had to grassroots market eSports to the overall Siena campus prior to that, with help from Madru, and they eventually gathered a team of five student members within a few weeks. This team then went to that invitational but lost to Marist in the tournament.

Today, that team, now with 14 members, has grown into two factions: an undefeated 5-0 A squad which competes in weekly League of Legends, and a B squad that scrimmages other universities’ B squads to improve their rankings.

For this fall season’s ECAC eSports competition which began in October, Bates said the team had received an official ECAC competition schedule, and would face fellow institutions like Marist College, SUNY Canton and Cayuga Community College.

However, the team is neither a club nor a Division I program, so it’s technically not immediately open to everybody—“It’s kind of in that limbo grey area right now.” He would like to further formalize the team and its recruitment process in the near future.

“You can look up player profiles online to see what they’re proficient at, how much they have played certain games or their kill-death ratio,” Madru said, explaining one way he scouts for the team. “There’s this website called op.gg where you can do that.”

Madru said this eSports team can help students make friends, spend their time and feel more comfortable at Siena, which could ideally lead to a higher college retention rate. It’s also another way to represent, promote and support Siena, as well as exude school spirit.

“I love to compete, I played games in high school, and I played varsity regular athletics, golf and baseball,” Madru said. “And I just have this competitive nature in me where I like to win and compete cooperatively with a team. So, when this opportunity—for an eSports team here and to play League of Legends which I already enjoyed—came, that was it.”

He revealed that growing up, he was a huge fan of Nintendo games like Pokemon and Mario Kart. As he got older, he welcomed games like Halo, Call of Duty and especially League of Legends, which he said was introduced to by a high school friend.

A major strategy he uses when playing is to “always communicate with your team. If you don’t, then it’s just five people playing the same game. If you’re communicating and talking to your team, then it’s much easier to make plays and work with them. It’s also important to keep a level head when playing because you hear a lot about players getting upset or mad, or even pro-gamers smashing their controllers. People do get compassionate and can get upset during games. But when you’re frustrated, you’re not playing at your best.”

Bates, who revealed that he did not know much about eSports prior to this team’s establishment, also embraced it for expanding Siena’s footprint in intercollegiate competitions and gaming throughout the Northeast. He added that eSports can further create a more inclusive campus community and can “make for a well-rounded individual.” However, the program lacks a formal operating budget and Siena does not offer eSports college scholarships, at least for now.

“But having programs like this helps with recruitment when looking into interested high school graduates who are deciding on which college to attend,” Bates said. “If a student is really into eSports and wants to continue that into their college years and be part of a team, then we hopefully want that to be part of the decision-making for a student one day, much like joining a lacrosse, basketball or soccer team.”

While the eSports team is undergoing the fall competitive season now, its future ambitions remain bold as it plans to compete in its spring season, and attend the Hudson Valley GamerCon, the biggest Northeastern collegiate eSports event, on Mar. 30 and 31, 2019 at the Albany Capital Center.

Looking ahead, Madru wants parents to encourage their children if they’re interested in eSports or video gaming, “as long as they get their schoolwork and stuff around the house done. There is possibly a future for them, like getting scholarships for college.”

“I’ve always also encouraged kids who enjoy games like Fortnite or League of Legends or FIFA to follow their passion and do what they love,” he concluded. “Let them play.”

DISCOVER LOUDONVILLE: A Loudonville native placed the blame of Lincoln’s death upon his shoulders, and paid dearly for it