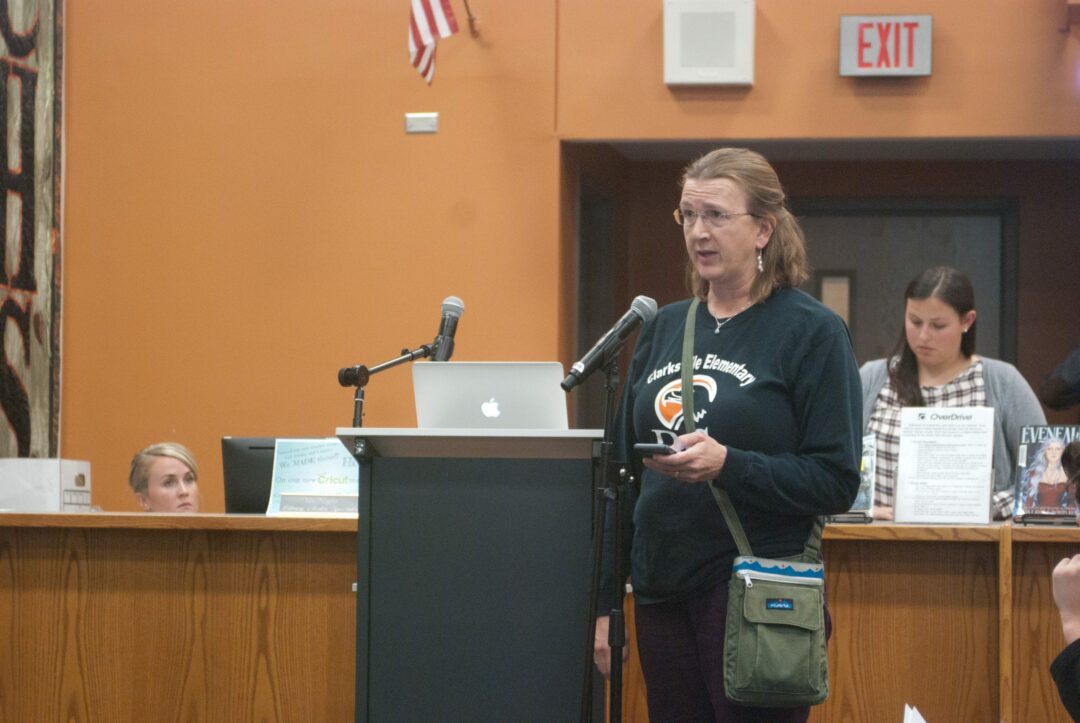 Resident Judy Abbott, above, expressed her disapproval of Clarksville’s sale before the Board of Education, but stressed she’s not being anti-BCSD or anti-county Sheriff’s Office though. Diego Cagara / Spotlight News

BETHLEHEM — The Bethlehem Central School District’s Board of Education voted 6-1 during its meeting on Wednesday, Nov. 7 to approve the purchase agreement for the sale of Clarksville Elementary School to the Albany County Sheriff’s Department.

The county Legislature approved the purchase agreement in which the school building and grounds would be sold for $325,000 on Oct. 9. In an Oct. 30 press release provided by the school district, it clarified that it “would receive $198,000 at closing and $127,000 of in-kind patrol services by the law enforcement agency over a five-year period.” The in-kind services come in the form of two sheriffs separately patrolling the high school perimeter “from the Tuesday evening following Memorial Day through the evening of graduation (typically the last Friday in June).”

Clarksville Elementary School closed at the end of the 2010-11 academic year in June as a result of a report done by the Capital District Regional Planning Commission titled “School Enrollment Projections for Bethlehem Central School District” which helped informed the Board of Education’s decision to close it or not.

It found that BCSD’s enrollment had already started to decline. The district’s enrollment peaked at 5,182 students in 2006-07 but has since fallen to 4,451 in 2018-19. Current projections indicate that the district will have 4, 135 students enrolled for the 2022-23 academic year.

The report attributes the declining enrollment numbers to two things: how Generation Z’s children are the only ones who will be attending school in the next few years; and the decline in local birth rates as women want to wait longer before having children.

However, the report also acknowledged that there is considerable residential growth within and around the school district.

During the Nov. 7 BOE meeting, New Scotland resident Judy Abbott, whose children attend BCSD, donned a green Clarksville Elementary sweatshirt to again voice her disapproval of the school’s sale. However, she also emphasized that she was not being anti-Sheriff or anti-BCSD, and did not want her and her children to receive any backlash from either entity in the future.

Referring to the recent residential growth in Bethlehem, which indicates that student enrollment could increase, Abbott felt that the district should have retained ownership of the building so that it could accommodate additional students without having to build another school sometime in the future.

Abbott also said she did not trust the Capital District Regional Planning Commission report’s enrollment projections, bringing up how in the past, it had informed the school district that Eagle Elementary needed to be built to accommodate the then-enrollment rates but by the following year, the report was updated to inform the district to “double the size of Eagle.”

“The [report’s enrollment] models do not quantitatively or mathematically incorporate the development growth that the report is presenting,” she said. “So, I suspect in a few years we will be hearing about how we are going to need to expand a school and that will be quite unfortunate.”

She added that with Clarksville Elementary’s closure and sale, she feared that children living in the Clarksville hamlet would have to spend a much longer time on school buses to and from home.

BOE member Meredith Moriarty responded later by saying that the district is paying attention to and working on Clarksville children’s bus schedules and their transportation durations, so “that they’re not spending an hour on the bus to get to school or waiting in the dark very early and waiting for the bus.”

Fellow BOE member Christine Beck added that she respected Abbott’s concerns although she personally did not believe that future enrollment would go up.

Similarly, BOE member Willow Baer said that she appreciated all the public input, particularly Abbott’s commentary, and reiterated that the BOE does listen to concerned residents and read through their letters, as part of informing its final voting decisions on the matter.

Jonathan S. Fishbein, the only BOE member who voted against accepting the purchase agreement, said he thinks the sale “is a mistake because I see every available plot of land in Bethlehem being built on and there are 26 homes going up on Bender and another six by Kenwood. If they can find a place to build, they’re building. I don’t think that’s good for the community and what’s worse is every single family home that goes up increases your taxes.”

Regarding the latter, he explained that taxes on a single family home do not cover the cost of educating the potential children from that home.

Similar to Abbott, he also feared that in the future, local development and enrollment may grow which would require another new school building, that could unnecessarily cost taxpayers more money.

The building property is scheduled to close by the end of the current calendar year, according to the school district.