Study: Development of Starlite site could generate 1,610 vehicles a day 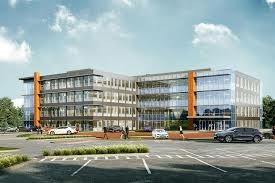 COLONIE – A 78-page study of the former Starlite Theater site, slated to be introduced to the Planning Board on Tuesday, April 10, found the plan to mitigate traffic is within the parameters set forth in the Boght Road-Columbia Street Generic Environmental Impact Statement.

The study determined the proposed 150,000-square-foot office building proposed by the Galesi Group as a new headquarters for Ayco, a financial management company under the Goldman Sachs umbrella and potential future development would generate 808 new vehicle trips during the morning peak hour and 802 during the afternoon peak hour.

“Although only 150,000 square feet of office space is currently proposed, we believe it is beneficial to evaluate the impacts of these possible future developments to insure the transportation improvements initially constructed can support future development in the immediate vicinity of the project,” according to the study completed by the engineering firm of Creighton Manning.

The proposal by the Galesi Group includes a connector road between Route 9 and Route 9R to alleviate traffic congestion at the intersection of Route 9, Route 9R, and the ramp leading to the Northway and Troy Schenectady Road. The connector road will bifurcate the site and will, on paper, be located across the Auto Park Drive on Route 9 and across the Johnson Road on 9R.

The developer asked for $5 million from the state to help build the road but it was not included in any of the 2017 round of funding.

Also, Creighton Manning, based on the hypothetical buildout of all phases for the approximately 58-acre site, recommends a re-alignment of Old Loudon Road to connect to the new connector road, make improvements to the existing roadways including left hand turn lanes and coordinate all traffic signals in the area to help traffic flow.

Phase 2, the hypothetical office building that will house some 450 employees, will generate 232 trips in the morning peak hour and 184 in the evening peak hour.

According to the study, traffic for the hypothetical Phase 3 is as follows:

-Fast food restaurant: 121 in the morning peak and 98 during the afternoon.

-Sit-down restaurant: 70 in the morning and 68 during the afternoon peak hour.

Phase 4, the 182 single family housing units would generate 134 in the morning and 181 in the afternoon peak hour.

Six arrested at Colonie motel on drug and weapon charges