Enrollment projections not as steep at North Colonie 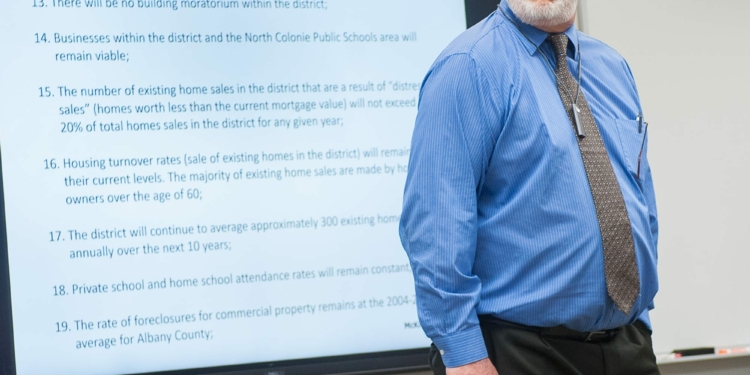 Jerome McKibben during a presentation on enrollment projections to the North Colonie Central School District School Board. Jim Franco/Spotlight News

COLONIE — The North Colonie Central School District is not expecting enrollment to jump as much as it did 10 months ago, when it used the need to accommodate a projected 1,000-student increase over the next decade to justify bonding $106 million.

According to Jerome McKibben, a senior demographer at McKibben Demographic Research, who recently made a presentation to the Board of Education, enrollment will increase from 5,685 this school year to 6,008 in 2027-2028.

“I’m a statistical mercenary,” said McKibben, who has been working for the district for two years. “I can work both sides of the argument. I can look at the anti-parent side, I have done work for them too. Are the projections lower than the last numbers? Absolutely. Are they 900 compared to 300? It’s fake news.”

Part of the pitch the district made at the time was that the elementary schools are filled to capacity now and just can’t handle the number of students McKibben projects will be moving into the district.

“What holds true is that we are still growing,” said Superintendent Joseph Corr. “We have overcrowding in our elementary schools and we still need to meet the needs of our kids. And we hear from our elementary school parents that class sizes are too large and that is what this project is meant to address. Shifting the sixth grade to the middle school is still a good decision and I stick by it 100 percent.”

Corr said McKibben’s estimates are more conservative than internal projections, which forecast 7,081 students in grades K-12 by 2027-28 school year. The district, he said, routinely meets with town officials to discuss things like new housing starts and other development issues to gauge its impact on enrollment – which does have a profound impact on everything from the amount of state aid a district gets each year to class size.

McKibben said any enrollment projection is based on some concrete numbers like the age of a population but also on the forecast of future conditions such as interest rates and their impact on the housing market.

Interest rates are key, he said, because that will determine how many people are selling their home and, conversely, how many are buying. Generally, older, empty nesters sell homes in a suburb like Colonie and couples with young families look to move in, in part because of the solid school districts.

The projected numbers have shrunk, McKibben said, because more people are staying in their homes longer, which means there is no turnover of families and less students moving into the district. Enrollment projections will continue to shrink, he said, if interest rates go above 5 percent.

By the same token, he said, if you have overcrowding now, that won’t change.

Right now, Corr said, there are rooms being used for class instructions that were not designed for teaching.

“Simply put, our elementary schools are jammed and we need to create more space there and upgrade the facilities,” he said. “The space as it exists is just too small and it is a serious issue regardless of the projections.”