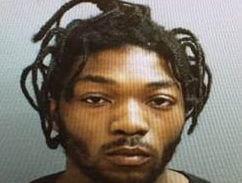 ALBANY – The fourth and last defendant in a brutal, strong-armed robbery in Menands was sentenced to 10 years in state prison on Friday, Jan. 12.

In November, 2017, a jury found Messiah Green, 22, guilty of joining three others in beating the victim at around 8:20 p.m. in the area of Pateman Circle and North Sage Hill Lane.

The four, punched the victim in the head multiple times while one defendant displayed what appeared to be a hand gun. They then stole his cell phone and wallet.

Police used GPS to track the victim’s cell phone to a vehicle occupied by Green and the three co-defendants, according to District Attorney David Soares.

The victim has since recovered from his injuries.

Among a host of other felonies, the jury found Green guilty of two counts of robbery in the second degree, both violent felonies.

Additionally, on Aug. 31, 2017, co-defendant Rayheem Cooper, 21, of Albany, was sentenced to five years in state prison, to be followed by five years of post-release supervision.

The disposition of all four cases was handled by Judge Roger McDonough.