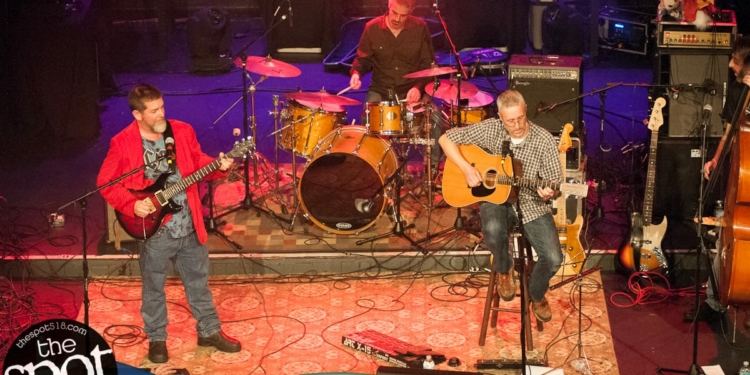 UPDATE: Our original gallery did not capture enough of Ominous Seapods keyboardist Brian Mangini. We owe a special thank you to photographer Kiki Vassilakis for sharing her pictures so that we could pass them on to you.

COHOES – It was as much a reunion for the people in attendance as it was for the band they all came to see.

The Ominous Seapods reunited before a sold-out Cohoes Music Hall to celebrate Tom Pirozzi’s 50th birthday. It was the first Seapods show since 2011, and one of only a handful since the band broke up nearly 20 years ago.

The evening was full of smiles and hugs in the audience as the crowd buzzed with conversations about past shows and present-day lives. As the band took the stage, Dana Monteith shared how this latest reunion came to fruition.

“There I was, in the desert of Western Austrailia, and I get a phone call from Tom,” said Monteith. Sporting a hint of an Aussie accent, Monteith shared how Pirozzi expressed interest in getting the band back together for his 50th birthday. “That’s great, mate. Let’s make it happen.” But, months went by without Monteith giving a firm commitment. More phone calls followed. Pirozzi said, “Dana buried his head in the sand.” Old friends from the State University of Plattsburgh appeared to relish their respective place in the world today while reliving the days of playing at The Monopole. “We called his wife, and she made it happen,” joked Pirozzi.

Before the show, Pirozzi expressed his excitement over the prospect of seeing faces, “I haven’t seen in 20 years.” Some fans who made it to the first of a two-night engagement had traveled from places like North Carolina and Colorado to see what was obviously not their first Seapods show. But, it was also apparent they didn’t just come to see the band, either. Which made the night all the more special.

Despite the span of years and limited rehearsal time, there were few hiccups during the night. “We’re just hanging out,” said Monteith. “I think we’ve earned that.”