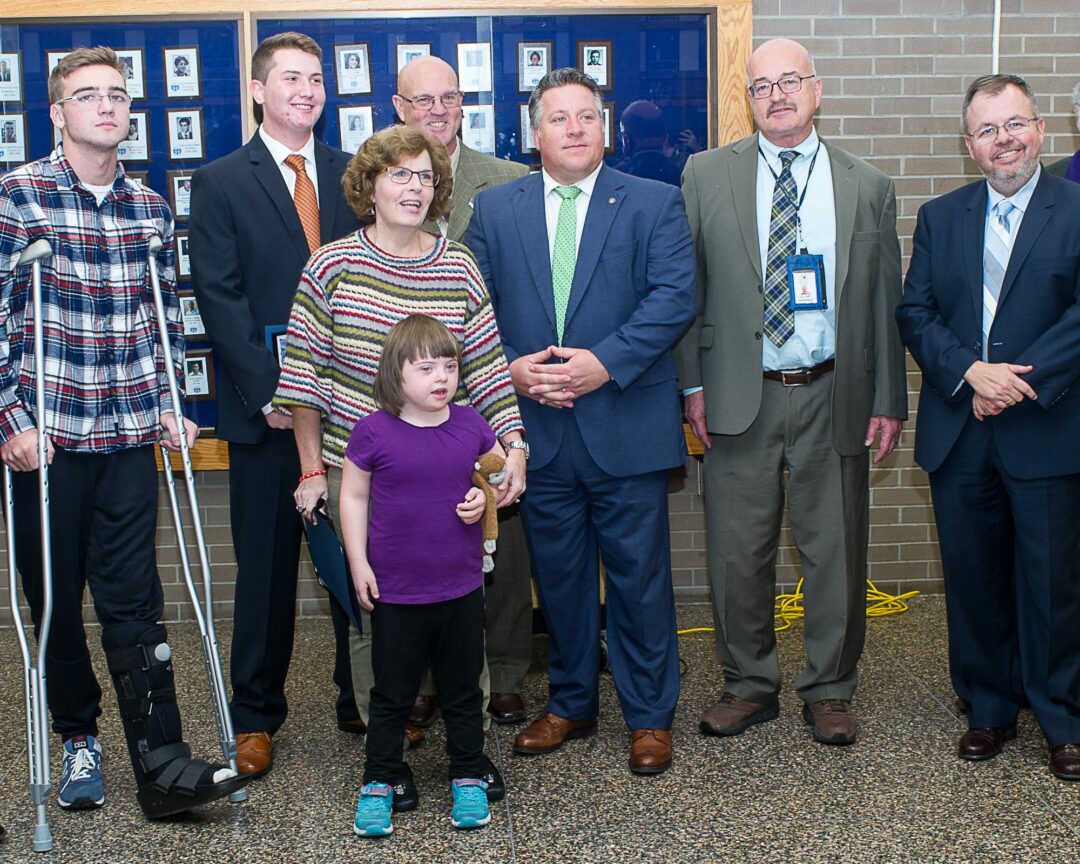 COLONIE – It was a typical September day in the Carina Court neighborhood – Ben Olsen and Gerard Rhatigan were headed to Shaker High football practice, and Mary Mawn was getting the pool ready for her 6-year-old daughter Theresa, who was inside eating a snack.

And then, in an instant, chaos.

It all happened very quickly,” Mary Mawn said. “I was checking on her every few minutes and in between me checking on her, she had figured out a way to go through a door to the garage, move some boxes around and she exited out a side door which is never used.”

She said she went to the driveway and looked around. Nothing. She asked a neighbor who was putting out his mail if he saw her. Nothing.

It was the first time in six years she didn’t know where her baby was and a feeling of “emptiness” swept over her. And then she started to panic.

The neighbor told some kids about Theresa. The kids told other kids and as Mary Mawn called 911, the tightknit neighborhood mobilized.

Olsen and his mother Patricia had just picked up Rhatigan for practice when Rhatigan’s little brother Brady told them of the missing girl.

“We didn’t hesitate,” Olsen said. “We knew what had to be done. We went on a mission to find this little girl”

And they did find the little girl, about a half hour after she disappeared, around the corner from her home in the middle of a swimming pool struggling to keep her head above water.

“We did what we had to do to get her out of the pool and we called police,” Olsen said. “They told us if she was in there another minute she could have died.”

“When you hear about something that serious you put it above everything else,” said Rhatigan, who missed his entire senior year with a broken right leg and broken left ankle suffered in the first game of the season. “When we found out a little girl was missing in our neighborhood we had to go look for her.”

The two seniors were named Citizens of the Month by Albany County Executive Dan McCoy on Thursday, Oct. 26, at a ceremony that featured all three families, a number of the Shaker student body, the football team and school and county officials.

“To rescue her and to make a difference is everything that I am proud of as county executive. To have citizens like you, who went out there selflessly and did an extraordinary deed,” McCoy said.

“On the stairs when you walk in we have a quote that says ‘character is doing what is right when no one else is looking,’” said Shaker Principal Richard Murphy. “On that day, they could have chosen to gone on with their day, hanging out with each other and going to football practice but instead they showed us they are individuals who put others in need above their own needs. They just knew they had to do what was right. They have families who raised them to do what is right when no one is looking.”

The two heroes, though, were quick to pat each other on the back – and their families too.

“Our coach, Greg Sheeler, teaches us we can accomplish more as a team,” Olson said. “In our locker room, is a sign about teamwork on that sign it says ‘it’s crazy about how much we can accomplish when no one cares who gets credit’ and I know Jared would agree with me neither of us were looking for the credit we are getting right now, and because of that we were able to accomplish more than we could ever imagine.”

“I just want to thank my parents for raising me to always to the right thing,” Rhatigan said. “I didn’t know it was going to be this big of a deal but I am honored to be receiving this award.”

Mary Mawn is all too aware that stories about missing children don’t always have a happy ending. It was only 40 minutes from the time Theresa went missing the time they were sitting on her living room couch but it was 40 minutes that went fast and seemed like they took forever at the same time.

“They have their priorities in order and they know to help each other,” she said of the two Shaker students who saved her daughter’s life. “It’s hard to put into words how grateful I am to have great neighbors who look out for each other.”