School of Champions: Shaker softball and boys lacrosse are the best in Section II 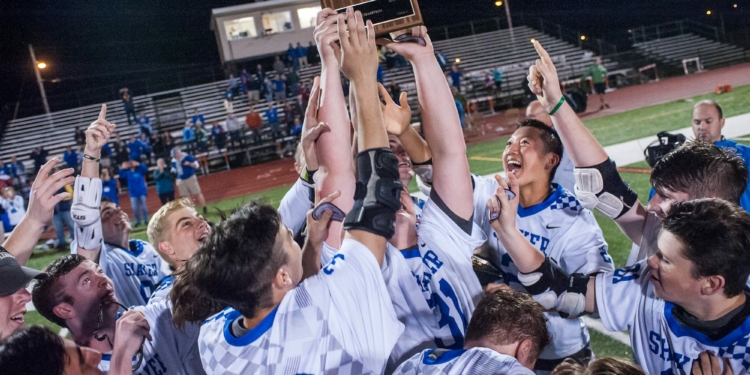 COLONIE — “Players win games. Coaches and everyone else just have an opportunity to help them out a little bit,” said Shaker Lacrosse Coach Shawn Hennessey.

The last time two Shaker teams won a Section II title in the same season was in 2012 when the boys and girls outdoor track teams took home their respective championship trophies, and prior to that was in 2009 when the indoor track team and the hockey team claimed Section II bragging rights.

See photo galleries of the Shaker lax games here and here. To see a photo gallery of the girls Sectional win click here.

“Our athletic program on the whole has been doing a tremendous job over the last 10 years,” Hennessey said after losing a heartbreaker of a regional game on Saturday, June 3, against Lakeland-Panas 10-9. “Our Superintendent Joe Corr and the administration are making sure we have opportunities and facilities and taking care of us at Shaker. We are one of the only schools in the area that don’t just compete in one sport we

compete in all of them. They are doing something right over there at Shaker and I’m proud to be a part of it.”

“It’s great student athletes working with great coaches and persisting and the hard work and dedication and teamwork and commitment all comes together and it pays off,”  he said. “There are eight periods a day and I look at athletics as period nine. There is so much learned through athletics like cooperation, dealing with adversity gracefully and success gracefully and life-long lessons that are important and integral to interscholastic athletics.”

While the lacrosse team was ticking along all year, losing just one game until the regionals, the softball team is clicking at just the right time and will play in the state semifinals against Binghamton on Saturday June 10, at Moreau Recreational Park. The first pitch is slated for 11:30 a.m.

“It has been just fantastic,” said Coach Kristen Calahan. “We have always had the community’s support but this has been unbelievable. We had the booster club and the marching band and administrators and teachers all sending us off to Syracuse and cheering us on. It is so great for the girls to have their athletics taken seriously.”

In Syracuse, the squad handily beat the Northstars 8-1 in the state semifinals.

Like Hennessey, Calahan tipped her hat to the community and the junior leagues the athletes participate in as they are growing up.

“It’s the kids and the feeder programs all the way up to the administrators at the high school and the school district,” she said. “Athletics play an important role in a student’s and a school district’s well-being.”

Acting Athletic Director David Stadtlander pointed not only to the higher profile lax and softball teams but also to three girls competing this week in the state track and field championships: Caitlyn Zegger in the high jump, Journey Myricks in the discus and Nia Joyner in the 200 meter. Also, Jeremy Weismann will compete in the 200 meter and Kwaku in the triple jump for the boys’ squad.

“It’s a great group of kids,” he said of the Class of ’17. “It’s always fun to watch a group of talented kids compete but, when they are a really nice group too, it’s all the more rewarding.”

Shaker Booster Club Co-President Peter Gannon said the district has “promoted a culture of success which starts at the top with Mr. Corr and you can see it in academics, music and arts and athletics.

“Student athletes, regardless of the results on the field, gain invaluable experience in character development, leadership and teamwork,” said Gannon. “And when their effort leads to success on the field it energizes the community and that’s a source of tremendous pride for alumni and the community as a whole.”