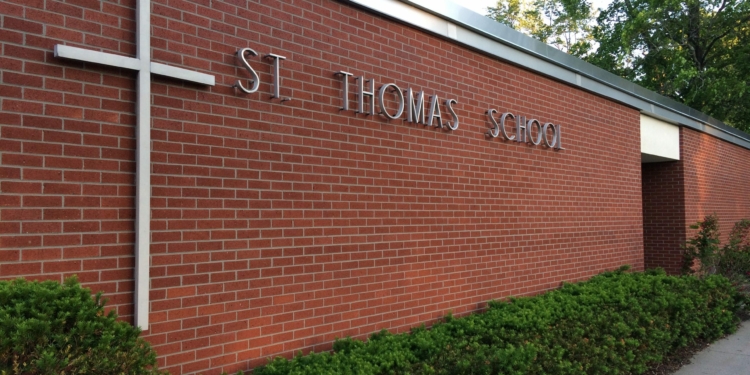 DELMAR — “The 1960s was really the peak of Catholic education,” said Thomas Kane, principal at St. Thomas the Apostle School in Delmar. It was during that era, he said, when the school had it highest enrollment numbers — close to 50 students per class. These days, that number is closer to 22.

Built in the fall of 1956, St. Thomas is celebrating its 60th anniversary this coming weekend with a series of community events and is hoping to see many of its 3,000-plus graduates — as well as faculty, family, parish and community members — come out to commemorate the occasion.

“Anyone who’s had any connection whatsoever with the school,” said Kane. “We really would like anybody who has had any sort of relationship with St. Thomas over the years to come and celebrate 60 years of great education.”

Noting that the community around St. Thomas has changed considerably over the last six decades, Kane, who has been the school’s principal for 17 years, said that the school has changed too. For one thing, there are far more staff and faculty members who don’t identify as Catholic. “There are very few religious still in the Catholic schools today,” he said. “They’re not sisters or brothers or priests anymore. That’s been a big change, certainly.”

For another, the school has dramatically expanded its curriculum. “We offer so many more programs than we used to,” said Kane. “Full music programs, theatre programs, art programs, technology.

“It’s a wonderful place that really teaches students how to become change agents in the world,” said Kane. “They’re called to use the gifts that God has given them and learning as much as they can is the way they can use those gifts.”

The events will span three days this weekend. Friday will feature meet-and-greet events at three local venues — O’Slattery’s, Twisted Vine and Swifty’s — from 7 to 11 p.m. On Saturday, an open house at the school will allow visitors to tour the building and explore its history. On Sunday, there will be a reception, the only event requiring registration,  immediately following the 11 a.m. Mass.

“What makes you feel the best, as an educator,” said Kane, “is when a student comes back to you after they’ve graduated and they tell you what they’re doing, and they thank you for how important you were in helping to shape their lives and to get where they are. It’s that visit from a former student, when you’re lucky enough to see what has grown from the seeds you’ve planted. That’s the best.”

School of Champions: Shaker softball and boys lacrosse are the best in Section II