The State of Colonie 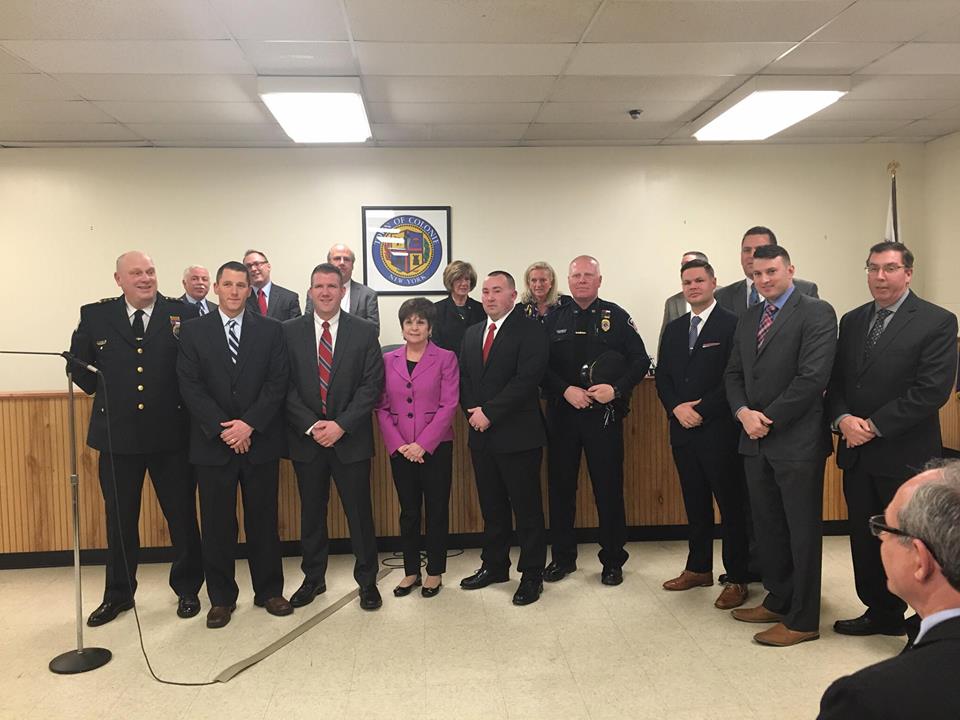 Supervisor Paula Mahan stands with the town board and members of the town’s emergency response and law enforcement, services cited as reasons for Colonie being named a desirable community to live. (Photo by Kassie Parisi/Spotlight News)

The address, given on Thursday, Jan. 19, was Mahan’s tenth as supervisor. In her speech, she touched on how during her first speech in 2008, coming into a government position previously having been a teacher, her seventh and eighth grade students told her to just do her best.

Now, Mahan said, the town has moved forward in leaps and bounds. She touted the fact that Colonie once again was voted “Best Suburban Community” by Times Union readers in 2016, and the fact that a survey conducted by Siena College showed that an overwhelming majority of residents believe that the town is on the right track, and the townspeople enjoyed the recreational facilities, library, and low tax rate.

The town’s public safety facilities, something the continuously lauded as one of its strongest attributes, was also brought up in the address. The Colonie Police Department’s regular staffing level is currently at 112 officers, the highest it’s been in 25 years, according to Mahan. In addition, the department and EMS Department are now equipped with the technology that allows them to send data to hospitals quickly. She also cited the recent construction of a “streetscape” that incorporates the physical features encountered by emergency responders in the real world.

The town has also, for the sixth year running, met the requirements of the New York state Tax Cap, something Mahan said continues to be difficult to accomplish. The town’s budget has also gone down within the past decade. In 2008, Mahan inherited a budget of almost $92 million. Now, in 2017, the budget is at $88 million. Mahan has said in the past that the town’s fiscal standing has improved as a result of tight budgetary processes and restrictions, and teaching town departments to move forward with a  “live within your means,” mentality. Mahan also has a budget committee that combs through each dollar spent by each department.

In the future, Mahan said in her address, she’s aiming for improvements to the town park and the library, which has been in dire need of upgrades and renovation for some time.

“I am glad to report that 95 percent of the town’s major feeder roads are now at very good or excellent condition…and we are making progress with our residential streets,” Mahan said.

Another point touched on in the address was the current comprehensive plan review. On the original 2005 plan, Mahan said, a main goal was to focus on development within the town, which she touted as one of the original plan’s most successful accomplishments. Now, as the plan is being updated, the review committee will analyze what issues to best focus on going forward, including headline items such as traffic and perceived over development and commercialization in some areas of town, such as Wolf Road.

Some residents, however, are urging the town to have caution as it moves forward. SAVE Colonie, a local advocacy group focused on preserving open space and natural aspects of the town, as well as slowing what is often perceived as rapid development, called on the Planning Board in a recent letter to suggest the board not consider approving any Planned Development District (PDD) applications until the comprehensive plan review is completed, which could take months.

“In response to an outcry of tax-paying residents, concerned over what has been termed ‘over-development,’ the town is wisely in the midst of a review and reassessment of its 2005 Comprehensive Zoning and Land Use Plan, and other planning tools such as the Airport GEIS and traffic studies are pending. Approval of PDDs, and their increased traffic, pressure on the neighborhood schools and aging infrastructure, and attendant higher density than an area’s zoning authorizes, is one of the main objections residents have expressed during several of the public outreach meetings,” the letter read.

The group also asked that officials take a closer look at any senior housing proposals that come before the board. The group suggested that, rather than moving along the same trajectory the town has been on for the past decade, the momentum should be slowed.

“It is past time to take a big step back from “business as usual” at the PEDD and Planning Board,” stated the letter. “Town residents say no more ‘cookie cutter’ ‘out of the box’ retail outlets, no more spot zoning PDDs that benefit developer/broker/donors and burden our town’s infrastructure, schools, and quality of life. The Comprehensive Plan process gives us the opportunity to take a hard look and make some corrections.”