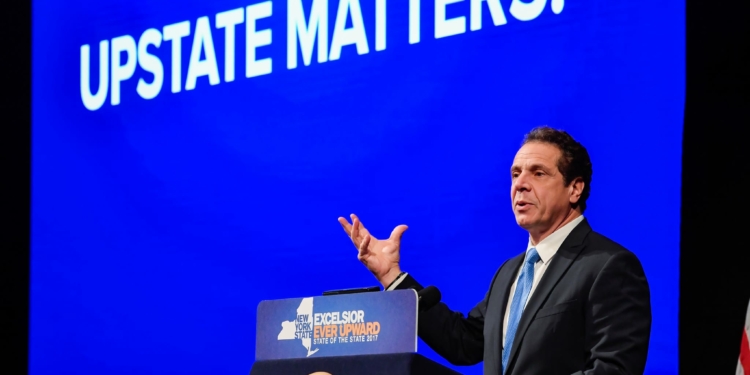 ALBANY — Earlier this month, Gov. Andrew Cuomo delivered his annual report on the state of New York in a series of State of the State addresses — each tailored to one of six regions and delivered over three days in New York City, Buffalo, Westchester, Long Island, Syracuse and Albany.

Entitled “New York State: Ever Upward,” the addresses featured almost 150 proposals from the governor’s office, including: the completion of the Empire State Trail; a $2 billion investment in water infrastructure; the expansion of upstate ridesharing services; tuition-free education at public colleges and universities for families making $125,000 or less; a task force dedicated to fighting discrimination and hate crimes; the closure of Indian Point Nuclear Power Plant; and the development of off-shore wind power sources.

In a heavily Democratic region, many local residents and interest groups are looking to Cuomo to insulate New Yorkers from decisions expected at the federal level, particularly regarding things like the environment and health care, widely expected to be negatively impacted under the incoming Trump administration.

“The president-elect and a lot of folks that we see being appointed to Cabinet positions have been, I think, very pro-fossil fuel industry and certainly very pro-pipeline in their statements,” said Conor Bambrick, air and energy director for Environmental Advocates of New York (EANY). “It ultimately comes down to Governor Cuomo and his team and how much they’re willing to take a stand like they have been recently.”

In 2016, Cuomo and the DEC essentially thwarted pipelines that were vocally opposed by residents — those who would be affected by the pipelines themselves as well as those who would be negatively affected by the overall increase of fossil fuel transportation in the region, via the much-protested oil trains into the Port of Albany. While he didn’t specifically mention pipelines or oil trains in his 2017 addresses, the governor outlined several proposals that could have the effect of deterring the expansion of oil transportation around the state.

A proposal to reduce a carbon emission cap by at least 30 percent between 2020 and 2030 could make it difficult for the oil industry, even with the help of the federal government, to pass environmental standards set forth by DEC. “New York has a goal to reduce climate pollution in this state by 40 percent by the year 2030 and 80 percent by the year 2050,” said Bambrick. “And they have a state energy problem, so they have to look at these kind of projects in the context of those goals.”

Other proposals that could potentially affect the fossil fuel industry in New York state are greater regulation of methane-producing sources, such as those in the oil and gas sector, and the preservation of open spaces and farmland.

“I think that’s a real threat on the federal level and I would hope that Gov. Cuomo sees that and feels the need to work more closely with the legislature to actually lock clean air and clean climate policies into law.”

“I have been advocating for those living in the South End of Albany over concerns regarding the transportation of crude oil for the past three years,” said Albany County Executive Dan McCoy.  “Global Partners has now been required to update its permit because Albany County spoke out. It took time, lots of public outcry and effort. We still want a full environmental impact study done before any permit is granted. DEC is talking with us but more is needed and that is my overall reaction. When health, welfare and safety are priorities, action needs to be taken quickly to protect our residents.”

“Cuomo has a history of only doing the right thing when pressured by grassroots organizations and public opinion,” said Diana Wright of People of Albany United for Safe Energy (PAUSE). “Much of his campaign donations come from the gas and oil industries so he is reluctant to alienate those donors.

“It is imperative that our state legislators, led by a proactive Governor, quickly enact laws which protect the State from the climate-denying cabinet the president-elect is amassing,” she said. “NY Renews, a coalition of 82 organizations from across New York, of which PAUSE is a member, has called on Governor Cuomo to work with the legislature and enact the Climate and Community Protection Act, which will ensure all of New York’s decisions meet the dual standards of climate safety and environmental justice. This bill has passed the Assembly, but is again awaiting introduction in the Senate.”

In the meanwhile, said Wright, PAUSE will continue to do what they’ve been doing since 2014: “Educate, organize, demonstrate; we have formed alliances with many environmental and social justice organizations across the state and the country to strengthen our messaging and our impact.” PAUSE recently became an affiliate of 350.org and is working with groups in Maine, Massachusetts and surrounding states to push a divestment agenda to convince financial institutions such as TD Bank — a major backer of the controversial Dakota Access Pipeline — to withdraw financing from that and other fossil fuel projects. This includes the Keystone pipeline, which Wright said has a good chance of coming back due to Trump investments in that pipeline. “We will continue working to keep fossil fuels in the ground, while advocating for a safe, clean, sustainable energy future.”

“It’s always helpful when communities and residents make their voices heard,” said Bambrick, calling fossil fuels a statewide issue. “It certainly makes the case to the Cuomo administration to act or to not act.”

In response to the looming spectre of ACA repeal, and without proposing a specific plan, Cuomo told New Yorkers, “We will not go back to a place where nearly three million New Yorkers are uninsured or Medicaid is decimated and our world class New York healthcare system is dismantled. We will not allow that to happen in the state of New York. We’re going to work with [healthcare union] 1199 and the greater New York Hospital Association to make sure that doesn’t happen.”

“These are frightening times,” Cuomo said, ending his final address in Albany. “And these are difficult times. And these are politically ugly times. And the election was dramatic and the political season was heated. And I can’t tell you how many people literally seem shaken by what has been going on in the country, and questioning who we are and what we believe and what we’re all about. But I want you all to rest assured that these are stormy times and they’re times of instability, but New York will always be New York.”

The State of Colonie